Lost and Found
Space Ace
Power Up!
Let the Light Shine Through

Time Extension!
Your Land is my Land

15 (locations)
The Valix Belt is a location in Deadlocked. It is an asteroid belt asteroids in the Shadow Sector that is right next to a black hole, and is home to the Valix Lighthouse Network. The asteroid belt was purchased by Gleeman Vox and used as one of the DreadZone battlecourses.

Ratchet and Team Darkstar came to the station for its challenges after completing the Crusader Tournament.

The early colonists of the Valix Belt attempted to mine valuable metals from the asteroid belt. To achieve this, they constructed a facility tethering dozens of asteroids together into a single interconnected whole, with a lighthouse shining brighter than nearby stars.[1] The Valix Lighthouse's light source, known as the Gamma Energy Beam,[2] guided ships through deadly asteroids, and was defended by the Valix Network Security Corps.[3]

The facility was later purchased by Gleeman Vox and used as a battlecourse. For the course, Vox deactivated the lighthouse, causing hundreds of ships to crash into asteroids if the contestant did not successfully reactivate it.[2]

The Valix Belt is a cluster of asteroids located near a black hole. Across these asteroids are flat tops, forming a walkable path across them, on which there are several rock formations, craters, and a few plants. The tops of the asteroids are also where the Valix Lighthouse Network buildings are constructed across them. Connecting the asteroids in the Lighthouse Network are bridges and walkways, joining them to form a cluster surrounding the Valix Lighthouse at the center of the belt.

The DreadZone battlecourse in the Valix Belt contains few additions from Vox Industries. Those that are present come in the form of some floating metal platforms across large craters in the uninhabited asteroids, forcefield bridges to form paths across them, and cameras placed around the zone. 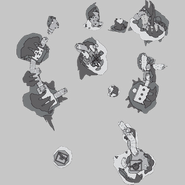 Map of the Valix Lighthouse Network

Locations in the Shadow Sector in Deadlocked
Retrieved from "https://ratchetandclank.fandom.com/wiki/Valix_Belt?oldid=346937"
Community content is available under CC-BY-SA unless otherwise noted.