Use some super-charged suction power to smash open crates and objects… or suck your friends straight into your VAC-U gun and shoot them back out again as projectiles.

The Vac-Uis a gadget in Ratchet & Clank: All 4 One. It can suck up objects, other playable characters, or enemies using zepto-shrink technology. It was designed for Ephemeris to store critters. The Vac-U could also be used to shoot other players into the air for a stomp.

The Vac-U is found in Aldaros Plains on planet Magnus.

The Vac-U is equipped by pressing

. When equipped, the player can suck up objects or other players, causing a trajectory line to appear. If the line is blue, it means it is in the correct direction and position to take the character to the other side. If it is red, shooting the character out is disabled. 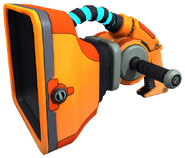 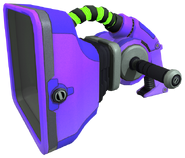 Equipment in All 4 One
Retrieved from "https://ratchetandclank.fandom.com/wiki/Vac-U_4000?oldid=310538"
Community content is available under CC-BY-SA unless otherwise noted.