Image needed
This article or its infobox is missing one or more images. You can help the Ratchet & Clank Wiki by uploading one.

Up Your Arsenal features a competitive multiplayer mode that allows for offline split-screen play with up to four players as well as online play with up to eight players. The multiplayer features ten different maps, most of which are based on locations in the Galactic Rangers' missions in the single-player game, three different game modes, eight weapons, and two vehicles. Multiplayer is primarily team-based, with teams divided into a red and blue team, though certain modes are a free-for-all.

When starting a match, players choose to either join a quick existing match or set up a lobby for their own match in which they could determine the options for a match, including the game mode (and any variations), the map, and which weapons or vehicles were allowed.

In Siege, the primary objective is to destroy the opposing team's base. This is done by destroying the two gatling turrets defending their base, teleporting inside, and destroying the power core. The bases are also guarded by two missile turrets, two troopers, and defences unique to each base. The red base is defended by generators that produce wheel-like robots that charge at foes at high speed, but can be intercepted or dodged. The blue base is defended by a tall machine that floats around and constantly spawns scout bots, that on their own attack nearby players.

Nodes are always present in Siege, and provide a strategic benefit to players in terms of providing spawn points as well as unlocking vehicles, which are often crucial in destroying a base' defenses. One variation of Siege is "Attrition Siege". This variation causes capturing nodes to increase the amount of damage, health, and accuracy of the base defenses and all nodes captured by that team.

In Capture the Flag, the teams must obtain an opposing team's flag and return it to their own base, to score a point, and a team wins after reaching a score cap, set in options. There are two variations on this mode: in "Normal", the team must also have possession of their own team's flag in addition to the enemy's flag, while in "Chaos", it is only required to retrieve the enemy team's flag to score a point.

All maps support Capture the Flag.

Deathmatch is a simple mode in which players win by scoring the maximum number of kills, set in options mode. There are two variations on this mode: a simple Deathmatch which is a free-for-all, and Team Deathmatch in which players are divided into teams and must score points for their team. This mode has no nodes or bases, and players will simply respawn at a random point after dying. If a player dies on his own by falling into the water, or getting killed some other way, they will lose a kill point.

Around most of the maps, multiple strategic nodes can be captured by the team to gain ground. This allows the nodes to be used as a spawn point for players of that team, as well as providing weapons and ammo. Some also grant vehicles or drone bots, which function as synthenoids that can also be placed to defend specific areas. Before a node is captured, it is defended by up to three neutral troopers and three turrets, with a minimum of only two turrets, which players must destroy to then use the bolt crank. A rare few also have missile turrets that only attack vehicles.

Nodes are optional in all maps in which Siege can be played. They are always present in Siege mode and are crucial in the Attrition Siege variation. Nodes can also be enabled in Capture the Flag.

Ten weapons are available in multiplayer, based on weapons that appear in Up Your Arsenal, as well as Ratchet & Clank and Going Commando. These are the N60 Storm, Blitz Gun, Gravity Bomb, Minirocket Tube, Lava Gun, Flux Rifle, Morph-o-Ray, and the Mine Glove. Players start with the N60 Storm by default, and can obtain other weapons found in crates throughout the map, with some crates only offering ammunition. The possible weapons available for a game can be set in options prior to a match. The Holoshield Glove is also available, although technically not classified as a weapon.

The weapons operate similarly to those in single-player mode, though they typically have less ammo. After a weapon has been used to kill three players, it will upgrade to a more powerful version. If a player dies, they will drop all weapons on death, which can be picked up by any other player by obtaining their weapon pack which will appear on the spot they died. Weapons do not always use the same model as their name has been traditionally used for.

Holoshield Glove
Add a photo to this gallery

Two vehicles can be obtained, depending on the map: the hovership and the turboslider. Both vehicles can be operated by two players: a driver, and one who controls the turret. The hovership is a slow-moving flying, the driver is able to fly the vehicle freely and fire the twin repeating rocket blasters, while the other player can control a bomb launcher. The turboslider is a fast wheeled vehicle, the driver is able to drive the vehicle and fire a machine gun at the front, while a turret at the back can be controlled by another player. 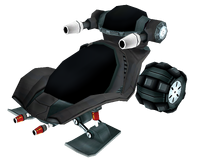 Turboslider
Add a photo to this gallery

Gadgets and other features

The Hypershot is enabled by default, and allows the player to swing across various gaps on the map. It is also often used for when players destroy certain destructible bridges, or close one using a bolt crank. The Gravity Boots are also available by default, allowing the use of grav-ramp traversal for various side routes. Some maps also use jump pads to get around, or have turrets that can be operated to hold a specific position. Lastly the Charge Boots are also an option to disable or grant to all players by default, and allow easy traversal on the bigger maps.

Each player uses one of a wide variety of skins, set on their profile. The skins in-game are colored blue or red corresponding to their team in that match. Each player can set a default skin in their profile, or change the skin while in a lobby for a match.

The Dan Johnson and Dr. Nefarious skins required you to access the Insomniac Games website, where you could input your multiplayer profile's username and receive a unique cheatcode for the Dan Johnson skin tied specifically to that profile. If you subscribed to their newsletter you would receive another cheat code, but for the Dr. Nefarious skin. The codes require you to hold

while on the 'Edit Profile' menu.

In the PlayStation 2 version, each player creates their own profile and name for the game's online multiplayer. This was tracked on a leaderboard, and players could add other players as "Buddies", as well as communicate through voice chat with headsets. For PlayStation 3, players used their PlayStation Network accounts.

In the main menu, it is possible to create any number of profiles for the game, which will be saved in an Up Your Arsenal save file. The profiles contain a username, default controls and options, an optional password, and a default skin. When in a lobby for a match, the player can select any of the profiles currently in that save file (though a password will be required for password-protected profiles).

When Insomniac Games were prototyping multiplayer, the new weapons for the single-player game had not been made yet, meaning the modes were initially developed separately and slowly brought together. The result is that many of the weapons in Up Your Arsenal return from previous games rather than being new to the game, as these weapons were artifacts from the early development when re-used weapons were all the team had to go on. Lower polygon models of the weapons and level geometry were used compared to single-player in order to accommodate split-screen, as the assets needed to be more efficient so that they could be rendered two-four times more than in single-player mode.[1]

One multiplayer feature that was planned was the "Mini-mech". The concept was that it would be possible to summon a mech, similar to an AT-AT from Star Wars, that would help take over the enemy base.[1] The text for the "Mini-mech" is still seen in the game's files,[4] and the mini-mech appears in the Insomniac Museum, commented on by Scott Reeser.[5]

Up Your Arsenal
Retrieved from "https://ratchetandclank.fandom.com/wiki/Up_Your_Arsenal_multiplayer?oldid=350845"
Community content is available under CC-BY-SA unless otherwise noted.