The Vukovar tribesmen are native to the Vukovar Canyon,[2] and took over the canyon after Gadgetron left, scavenging remains of Gadgetron technology to make use of weaponry, and also training the Barlowian saur-beasts to become mounts and savage killers.[1]

The Joba tribesmen are distant cousins of the Vukovar tribesmen, and trained their own Jobian saur-beasts, which adapted to Joba's harsher climate.[1] These tribesmen were disliked by Megacorp, and a disclaimer for their presence on the world was featured in a commercial for the Megacorp Games.[3] 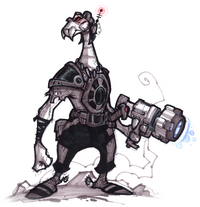 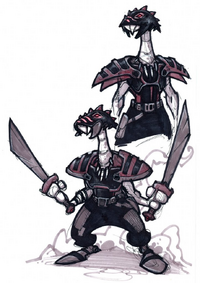 The tribesmen all share the same light blue skin color, and have a humanoid body shape, they also have large tusks and only three fingers on each hand. The Vukovar tribesmen wear basic, tribal clothing with limited armor, while the Joba tribesmen wear thicker, red armor, including a red helmet that covers their face.

All tribesmen carry shields for defense. As weapons, the majority wield swords, though some instead wield a stolen ranged pistol, which must be charged before firing. Some of these also ride saur-beasts as mounts. The Joba tribesmen are capable of operating turrets.

The tribesmen either attack with their sword and shield or a deadly laser pistol. The latter is clearly visible when it is charging, as it will be flashing a bright green color, when it stops the tribesman will fire, thus requiring you to time it properly to avoid it. Their shields can deflect Ratchet's OmniWrench, and they will immediately counter-strike at melee range with their weapon, but they are discarded if enough damage is taken. The swordsmen will charge towards Ratchet and swing their sword to attack. The pistol wielders are a greater threat, as their pistols have a notably long range, and they can fire them relatively fast.

Both Vukovar tribesmen have medium durability, are often found in groups, and will cluster up together, meaning that the Blitz Gun, Gravity Bomb, or Chopper will be effective at dealing with them. Those that are mounted atop saur-beasts can be dealt with using the Seeker Gun. The Miniturret Glove is also useful for back-up when handling large groups.

The Joba tribesmen are more difficult to defeat, but otherwise have the same behavior. They can be fought off with the Minirocket Tube for its stopping power, though the Lava Gun can also do decent damage in medium range. It is also a good strategy to fire the Pulse Rifle or Spiderbot Glove and kill those that operate turrets, or to defeat these tribesmen by distracting them with the Decoy Glove. The Miniturret Glove and Synthenoids are also useful as backup.

Enemies and bosses in Going Commando
Community content is available under CC-BY-SA unless otherwise noted.
Advertisement