"Use your Swingshot", Outpost X11, Aridia

"Escape the sewers!", Blackwater City, Rilgar
The Trespasser is a gadget in Ratchet & Clank and the re-imagined Ratchet & Clank (2016 game). It is a handheld device with three prongs at the front, serving as an infiltration device that is used to open Invinco-locks[1] The player must complete a short laser puzzle to bypass a lock.

In the original Ratchet & Clank, the Trespasser is obtained on planet Aridia, after traversing an area using the Swingshot in "Use your Swingshot." He would later use it at the logging site on Eudora to reach and confront the Robot Lieutenant. Subsequently, the gadget was used from time to time to progress through missions, primarily on locations such as the Blarg Tactical Research Station, Batalia (to collect a gold bolt), Pokitaru (during "Navigate the sewers"), Gemlik Base, and finally Veldin.

Section incomplete
This section is empty or needs to be expanded. You can help the Ratchet & Clank Wiki by writing it.
The 2016 re-imagined game is primarily an unreliable retelling of events by Qwark.
The re-imagined game primarily describes Captain Qwark's account of events. As Qwark is an unreliable narrator, and contradictory events are in-universe fiction (though those which correspond still apply). Please see Project:Bulletin board/Canon for the wiki's coverage of canon.

In the 2016 re-imagined Ratchet & Clank, it is instead granted by the Shady Salesman on Rilgar, to help Ratchet and Clank obtain holocards for the RYNO, after the mission "Escape the sewers!".

The Trespasser opens an Invinco-lock, and presents the player with a puzzle. These present Invinco-locks as a circle with receptors for beams to hit, with the beams and their starting generators arranged on three circles, which could be rotated to move the laser. The player must connect every receptor to a beam.

In the re-imagined Ratchet & Clank, the player can press

to use AutoHack to skip any mandatory puzzles. However, puzzles that lead to secret areas cannot be AutoHacked, and using AutoHack on a single puzzle voids the "Safecracker" trophy.

The Trespasser did not return in other games, though it was featured in the 2016 reboot, with new minigames. The minigames are slightly altered in that sometimes the player may be required to deactivate a circle of lasers or blockers in order to connect beams to all receptors.

The Infiltrator by Megacorp uses a similar design to the Trespasser. 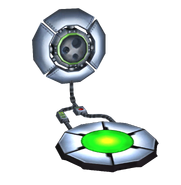 An Invinco-lock in the original release.

An Invinco-lock in the re-imagined release.