"Purchase the Tractor Beam" (costs 1,000 bolts), Megacorp Outlet, Oozla
The Tractor Beam is a gadget in Going Commando. It is a handheld gadget that allows the user to move certain objects around by manipulating them from a close to medium range, depending on if they feature an orange Tractor Beam target signal. Objects it manipulates include pillars, bombs, and Inspector Bots.

The Tractor Beam is a gadget prototype developed by the Megacorp Scientist in the Megacorp Outlet area on planet Oozla. After demonstrating it, the scientist offers to sell it to Ratchet for 1,000 bolts.

On Todano, Ratchet used the Tractor Beam during "Explore the Weapons Facility", to manipulate Inspector Bots as well as a set of glass columns, both to obtain the Sheepinator and to meet the Armory Employee. Finally, on Yeedil, the Tractor Beam was used during "Defeat the mutated Protopet", as several small bombs could be manipulated by Ratchet and thrown at the Mutant Protopet to deal damage. However, the Mutant Protopet could also eat these same bombs to spit explosive rocks at Ratchet and deal damage.

He also used the gadget to collect platinum bolts on Oozla, Siberius, and Yeedil.

The Tractor Beam can manipulate any object with an orange target signal. This allows Ratchet to use the Tractor Beam on the object and then move it around with as he pleases. Aside from moving around pillars for Ratchet to jump on, it can also be used to move small, round bombs around to destroy obstacles, and later to fight the Mutant Protopet. Another use for it is to move around Inspector Bots, which are plump, red, humanoid robots, which have clearance to certain areas for inspection. The Tractor Beam can move these Inspector Bots onto the platforms to grant immediate clearance and open doors or access elevators.

Both bombs and Inspector Bots can also be inserted into a frame that functions as a catapult, pulling the object backwards will then launch it forward when the Tractor Beam is let go.

The Tractor Beam segment on Maktar Resort was designed by Mike Stout and programmed primarily by Peter Hastings. This segment was problematic, as testers did not initially know to use the Tractor Beam at the very start. Mike then watched repeated failures by testers, which he said "broke" him as a designer. Mark Cerny later when praising one of Mike's segments during Up Your Arsenal commented that it "totally makes up for the Inspector Bot segment" in the Maktar Resort, which Mike referred to as a "backhanded compliment".[2] 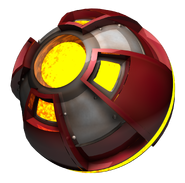 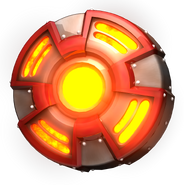