Torval is enjoying an absolute scorcher today, with all of its four suns blazing.

Torval was a deserted planet that was the site of various toy factories belonging to Gleeman Vox of the Vox Media Empire. Vox's line of Ace Hardlight action figures were built on Torval, but the factory was eventually shut down due to bad sales. The factory remains became infestated with Robot Zombies. After the factory was shut down, Vox had the abandoned factory and turned it into a DreadZone battlecourse. The objective of the battlecourse of Torval was to locate a single escape pod hidden there and escape before being hunted down by DreadZone's most elite forces. Ratchet was assigned to fight the battlecourse, and with Clank's advice and tips, he eventually discovered the escape pod hidden under a large statue of Ace Hardlight. With the help of his two battlebots, Merc and Green, he managed to blow up the statue and escape.

Long ago, Torval was once a shining jewel in the Solana Galaxy, leading it in art, science, medicine and literature, and had a great impact on shaping the overall society of Solana. However the Shadow Sector experienced a major decline in its past, at it became more warlike and criminal, leading to Torval to becoming a dead planet, the decaying city remains a testament to this event.[2]

Torval eventually would eventually become a major industrial hub in the Shadow Sector when Vox Industries set up several factories on the planet, most notably the Ace Hardlight Toy Manufacturing Plant within the remains of decaying city, whose purpose was to produce Ace Hardlight merchandise, such as the Ace Hardlight Action Figure. While these factories were originally quite profitable, Ace Hardlight became gradually unpopular on DreadZone, and soon Gleeman Vox was unable to get rid of toys, being unable to even give them away for free. When it became that sales of Ace Hardlight merchandise were continuing to falter, while Fuzzy Lombax ear] accessories for Tiny Tots Assault Weapons Kit was only source of increased merchandise revenue, due to Ratchet's rising popularity, Vox had the factories closed down to prevent further losses of profit.[3]

The Gleeman Vox Foundation then reconstructed the Ace Hardlight Toy Manufacturing Plant and the surrounding city into a deadly DreadZone Battlecourse. Thousands of DreadZone forces patrolled the city and the factory for DreadZone gladiators, and hundreds Robot Zombies infested the area looking for fresh meat.[4]

Ratchet, Merc and Green were sent here at part of a DreadZone challenge, with the goal of finding a hidden Escape Shuttle, their only means of escaping the planet, which was hidden under the Ace Hardlight statue. They managed to find the Escape Shuttle by blowing up the statue, allowing them to flee the planet.

The death of Gleeman Vox and the Gleeman Vox Media Empire led to Torval being once again a barren world.

Cut audio files indicate that there was a proposed Hoverbike Dread challenge, as well as a Challenge similar to Shaar's "Assault on the Frozen Tundra." They also indicate that Torval was the site of 2004's DreadZone Championship Round. 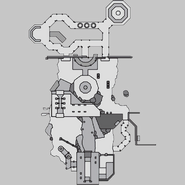 Torval map
Add a photo to this gallery

Retrieved from "https://ratchetandclank.fandom.com/wiki/Torval?oldid=338114"
Community content is available under CC-BY-SA unless otherwise noted.