Thugs-4-Less fighters[1] are enemy vehicles piloted by the Thugs-4-Less in Going Commando. They are small fighter-craft that comprise part of the Thug fleet. They were encountered by Ratchet and Clank in the Star Explorer in the Wupash Nebula, the Feltzin System, and planet Gorn.

There are four Thugs-4-Less fighter designs: a small green design, a medium-sized silver design, and a larger purple design, and a small red design used by ace pilots. These designs vary in toughness, but otherwise function similarly.

Ratchet first encountered the fighters in the Wupash Nebula, while traveling from Oozla to the Maktar Nebula in order to compete in Galactic Gladiators. In "Destroy Thugs-4-Less Fighters", a wave of nineteen fighters ambushed Ratchet in the nebula, followed by another wave of twenty. 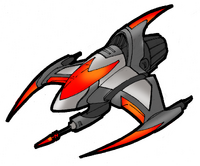 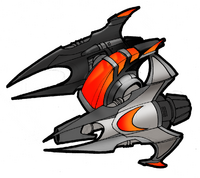 The green Thugs-4-Less fighter design is a small, high-speed vehicle, with axe-shaped wings, a laser cannon beneath it, and a red-tinted cockpit window on top. It can sustain little damage before being destroyed, but is quite fast and small, proving dangerous in large groups when they can use the asteroids for cover. They are easily defeated by the default laser cannons, but the Electro-Mine Launcher is also a good option.

The silver fighter design is a larger ship shaped similar to a manta ray. They are beefier, and more heavily armored than the green design, with stronger firepower. While they have a similar flight pattern to the green fighters, they are much rarer, and slower than the green ships. They often attack by flying directly past the front of the Star Explorer, which in turn makes them an easy target for the Torpedo Launcher.

The purple fighter design is the rarest, but among the most heavily armored and deals the most damage. These are also the slowest ships, making them good targets for the Standard Missile Launcher.

The red Thugs-4-Less fighters piloted by ace pilots have the same design as the small fighters, though they are far more durable (more so than the purple fighters), and have more mobile cannons. Their durability is strong enough that it is recommended to pull out all the stops, with the Fast-Lock Missile Launcher or the Nuclear Detonation Device being recommended.

Green Thugs-4-Less fighters will fire at the Star Explorer by shooting in front of them, and often move in groups. Due to the volume of their attacks and their speed, they can deal heavy damage to the ship, in which case they should be evaded by boosting towards them and firing at them first, or by performing a barrel roll to dodge. They will often come within the line of fire when they end up in front of the Star Explorer after doing a run, or when flying head-first towards it to attack. In these moments, the ships should be destroyed with lasers.

Silver and purple fighters are slower, but can rotate their laser cannons to fire from any angle. Due to their heavier armor, these ships are better defeated with one of the ships' secondary weapons, such as the homing missiles or torpedoes, than the base lasers, assuming they have not been upgraded. As these ships are slower, they are also easier to avoid by boosting away.

Enemies and bosses in Going Commando
Thugs-4-Less
Retrieved from "https://ratchetandclank.fandom.com/wiki/Thugs-4-Less_fighter?oldid=346131"
Community content is available under CC-BY-SA unless otherwise noted.