"Visit Clank's apartment", Clank's apartment, Megapolis, Endako
The Swingshot is a recurring gadget in the Ratchet & Clank series. It is a wrist-mounted grapple hook that is used by Ratchet to latch onto a versa-target (typically coming in two or more variants) and swing across gaps. Initially obtained by Ratchet and Clank in the original Ratchet & Clank from Helga von Streissenburgen, purchased from her after completing Captain Qwark's fitness course on planet Kerwan, it has since been featured in some form in almost every entry throughout the series.

Ratchet and Clank first obtained the Swingshot gadget from Helga von Streissenburgen after completing Qwark's obstacle course in Metropolis, Kerwan. As they had, in her eyes, "disgraced" her obstacle course, she charged them 1,000 bolts to purchase it.[1]

The Swingshot was prominently used in the "Use your Swingshot" mission in Outpost X11 on Aridia, where it was used to explore a path containing several versa-targets,[2], which led them to the Trespasser. Both gadgets were then used at the logging site, Eudora to traverse some steep cliffs and confront the robot lieutenant. Ratchet also used it in the Gorda City Ruins on planet Oltanis to collect a gold bolt along one route, and the Morph-o-Ray at the end of the "Search the destroyed city" mission. Finally, it was used a few times on other planets such as Rilgar, Umbris, Orxon, Pokitaru, Hoven, Quartu, and Veldin.

In Qwark's retelling of events and the holofilm, Ratchet possessed the Swingshot from the beginning. He used it throughout the game, and also in scenes during both Ratchet rescuing Clank after crash landing on Veldin, and his fight with Qwark in the Deplanetizer. This Swingshot featured the later Tools of Destruction design, rather than the original design.

Ratchet found the Swingshot in Clank's apartment on Endako, during "Visit Clank's apartment". This time, the Swingshot had an additional use: winch targets, which allowed Ratchet to pull down drawbridges or pull floating platforms towards him to progress. Versa-targets were all green, with the exception of winch targets which were instead blue. He first used it prominently on Barlow, during "Scout the ruined machinery", after which he made use of it on many more planets. It was also specifically used on Joba and Boldan to collect platinum bolts, and on Snivelak to obtain a nanotech boost.

Up Your Arsenal to Size Matters

While the Swingshot technically doesn't appear in the game, a similar gadget named the hypershot is used instead. Like the Swingshot, it can used to grappple onto versa-targets, but it is a combination of the Swingshot and the Dynamo.

Although listed and called the Swingshot, the gadget that Ratchet used in Deadlocked was virtually identical to the Hypershot. It was apparently the only gadget not manufactured by Vox Industries that he was allowed to keep himself, and was used in a small variety of challenges. It lacked the more advanced mechanics from past games, only being used to swing across gaps or hook onto orbs above far-away platforms. Ratchet made use of the Swingshot on the planets Catacrom Four, Sarathos, Kronos, as well as during the Vindicator Tournament, on the Valix Belt, and in the Ghost Station.

Tools of Destruction to A Crack in Time

The Swingshot appeared with an entirely new design in Tools of Destruction onwards, using a green laser grappling hook more similar to the Hypershot than the original Swingshot. It also allowed Ratchet to use the gadget without manually equipping it by holding

when approaching a versa-target. Versa-targets looked slightly different, with swinging targets being green and grapple targets blue. In all titles, the Swingshot was immediately available.

The Swingshot returned, with the new Hookshot feature. This allows the user to pull themselves towards another team member to latch onto them and traverse gaps. It was used by Ratchet, Clank, Captain Qwark, and Dr. Nefarious, and was initially available.

The Swingshot returned with identical functionality, though it was obtained from the weapon pod with a Swingshot icon instead of normal ammo on the map. Swinging targets were represented by circles with yellowish beams on top.

The Swingshot returned again with the same functionality last featured in A Crack in Time, though it uses versa-targets with the appearance of those in Full Frontal Assault.

The Swingshot functionality was incorporated into Ratchet and Rivet's Omniglove gadget.[3] This was a similarly wrist-mounted device with a variety of applications, including the ability to tether to dimensional rifts. The Omniglove's Swingshot functionality was identical to previous appearances, allowing Ratchet and Rivet to swing across or latch onto versa-targets.

The Swingshot is used to latch onto floating orbs known as versa-targets. Three types of versa-targets exist: swinging targets, grappling targets, and winch targets (which featured only in Going Commando). Versa-targets are placed on both moving and non-moving targets, and latching onto them greatly improves the user's mobility by allowing them to traverse long gaps.

From Deadlocked onwards, the Swingshot is automatically equipped when

is pressed while aiming at a versa-target. This feature was first seen in the Hypershot in Up Your Arsenal, and extends to the Swingshot feature of the Omniglove in Rift Apart (though the button is mapped to

Swinging versa-targets are the most common of these, which allow Ratchet to grapple to the target and swing around, letting go as he pleases to jump forward to the next platform, or the next versa-target. In Ratchet & Clank, these are represented by yellow targets with thin yellow beams between them, though in every other appearance up until Full Frontal Assault, they are represented by stationary green targets. In Full Frontal Assault and Into the Nexus, they are represented by circles, which open when Ratchet nears to reveal a long, yellowish line with a beacon on top.

. They are often used to move towards platforms, though in rare cases, Ratchet holds onto a moving grapple target to be taken to another area. These are represented by spinning green targets from Ratchet & Clank to Deadlocked, though they are represented instead by spinning targets with blue lights from Tools of Destruction onwards, and have another new appearance from All 4 One onwards.

Winch targets are featured only in Going Commando, and allow Ratchet to pull a target towards him, often pulling down a drawbridge. These are represented by blue and black targets. 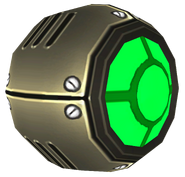 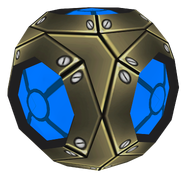 A winch target from Going Commando.

A versa-target from the 2016 reimagined Ratchet & Clank.

The Hookshot feature in All 4 One was used with

to attach to a teammate, allowing up to four players to be attached to a single versa-target.

In early footage of Up Your Arsenal, on planet Daxx, the Swingshot is seen being used rather than the Hypershot, and the Dynamo is used separately, suggesting that both were going to appear separately until they were combined into the Hypershot.[4]