The Sonic Summoner is a gadget that appears in Ratchet & Clank. It uses a hypersonic pulse emitter to produce a sound wave at just the right frequency[citation needed] that will attract a sand mouse, aliens which live in tiny underground homes. The Sonic Summoner is obtained by bringing the hoverboard race prize from Blackwater City to Skid's Agent at Outpost X11 on planet Aridia. 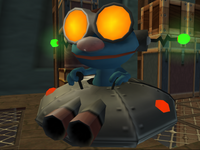 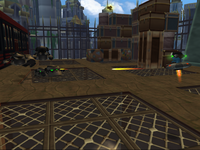 Sand mice are effective and capable hunters, but will aid Ratchet if they like him.[1] They float in tiny craft and will follow Ratchet from behind, attacking any nearby enemies with a stream of rapid-fire bullets, dealing capable damage. They eventually disappear on their own or if they have dealt enough damage. The "Eat Lead" skill point on Batalia requires one sand mouse to destroy all four cannonball tanks in the Fort Krontos area.

The original sand mice summoned could not fly; it would reward Ratchet with a lump sum of bolts upon meeting it and would sometimes require the player to walk it to another sand mouse house before presenting a reward.[citation needed]

Equipment in Ratchet & Clank
Retrieved from "https://ratchetandclank.fandom.com/wiki/Sonic_Summoner?oldid=330254"
Community content is available under CC-BY-SA unless otherwise noted.