Better image needed
An image on this page has quality issues that need to be rectified. Please help the Ratchet & Clank Wiki by editing or replacing it with a better version.
The 2016 re-imagined game and movie are in-universe fictional accounts of the original Ratchet & Clank.
The re-imagined game describes Captain Qwark's account of events, while the re-imagined film is an in-universe holofilm. As Qwark is an unreliable narrator, and the holofilm is fiction, any events that contradict the original are non-canon (though those which correspond still apply). Please see Project:Bulletin board/Canon for the wiki's coverage of canon.

Shiv Helix is a character in Ratchet & Clank (2016 game). He is a major criminal who had committed many crimes around the Solana Galaxy, and was Captain Qwark's cellmate while he was incarcerated in the Aleero City Penitentiary on Kerwan. Shiv Helix was a huge fan of Captain Qwark, who listened to him retell the events of his life during prison, which made up the events of the 2016 release of Ratchet & Clank.

Shiv Helix was a criminal who committed crimes throughout the galaxy, that resulted in him doing time in maximum security prisons including the Eternal Pits of Zordoom, the Iron Holds on Novalis, and others. He was a huge fan of Captain Qwark, dreaming of being arrested by him, and preordered the holo-game based on the Ratchet & Clank holo-film, based on Qwark's life.

After one crime, he was locked in the Aleero City Penitentiary, alongside Zed, Solitary Bill, and Captain Qwark. Shiv Helix expressed delight at being imprisoned with Qwark, and told him that he had pre-ordered the holo-game based on the holo-film based on his life. Qwark was upset that he had never been consulted about its production, and that no one would ever hear his side. Helix took pity on Qwark, and heard more of his story.

Qwark told the story throughout Helix' stay in the prison. Helix was both shocked and impressed to hear that Qwark betrayed the Galactic Rangers just because of his jealousy of Ratchet and Clank. Qwark concluded his story while the two were doing community service outside the Hall of Heroes picking litter, and Helix claimed that he enjoyed Qwark's story so much that he even rooted for Ratchet and Clank, despite normally wishing heroes die. After Ratchet and Clank arrived to greet Qwark, Helix stole a Combuster while distracted, fought off Solana Trooper guards, and escaped in Ratchet's class-g Star Jumper. This concluded with Ratchet, Clank, and Qwark working together.

Shiv is a short, purple alien with a scar across his left eye and a robotic left hand. He wears prison garb along with his inmate number, 117. While Shiv is a dangerous criminal, he is also a huge fan of Captain Qwark and is attentive when listening to his stories. 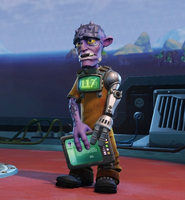