Set a new record for Qwark (1:50)
Shadow of the Robot is the third Qwark vid-comic in Up Your Arsenal. The comic tells the story of Captain Qwark who, having chased Dr. Nefarious to his base on planet Magmos,[1] infiltrated the base using a disguise. Nefarious saw through Qwark's disguise, and set traps waiting for him inside.

Taking place after Arriba Amoeba!, Qwark clung onto the side of Nefarious' ship and held his breath in space for six days straight, before Nefarious landed on Magmos, the location of his secret base. Qwark then disguised himself, first as a trash can, and then as a pizza delivery lady, hoping to enter the laboratory. Nefarious was dumbfounded by Qwark's stupidity, but let him in regardless and sprung the traps against him, hoping to kill him there.

Qwark instead fought his way through the defenses and confronted him. There, he recognized Nefarious from Mr. Bozell's 9th grade biology class in high school as the "freak with the headgear" who he had bullied while attending the school at twenty-six years old, by pouring chemicals onto his head, using his pants to clean the chalkboard while he was still wearing them, and giving him nuclear wedgies, among other things.[2] Qwark then accidentally tossed Nefarious down into the gears and machinery of his own laboratory, believing Nefarious to be defeated.

As the vid-comic ends, a robotic claw breaks through the machinery, foreshadowing the rise of the robotic Dr. Nefarious.

Shadow of the Robot takes place in Nefarious' base on planet Magmos.[1] The laboratory is an industrial factory filled with molten metal, flamethrowers, conveyor belts, and cogs in its machinery. In the background, buckets carrying molten metal can be seen. The color of the molten metal reflects in the laboratory, giving it a red look.

The laboratory is patrolled by blue robot guards known as henchmen,[3] which carry missile launcher pistols that charge before firing a slow-moving missile at Qwark. Additionally, heli-bots[3] fly around and defend the base, dropping bombs on Qwark. There are also several destructible machines that release large rolling bombs that hit anything on their path. 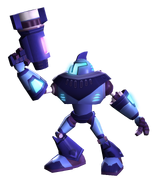 From where the level begins, you will immediately pick up Qwark's blaster, which will now have a lot more ammo than before. Jump up the ledge to encounter a henchman, which will halt Qwark before aiming its pistol; you can punch or shoot it before it even fires. As you proceed, you will be surrounded by henchmen on both sides, so punch or shoot through the ones on the right to proceed. Jump across the small conveyor belts and onto the platform, but before proceeding right (where another blaster pickup is), drop down to where a ladder is, and obtain the health upgrade. Climb back up the ladder and proceed forward. You should have 5 tokens by this point.

This conveyor belt actively pushes against you, so punch right to gain momentum across it, and jump over the rolling bombs that charge towards you. Eventually, you will find a generator for the bombs in the wall; punch it to destroy it, and then jump up the ledge and head forward. After killing the henchmen, you will come across another bomb generator. Destroy it and obtain the two tokens then jump up the ledge and obtain the next blaster pickup, but before heading right, instead jump left and grab onto the small ledge above, where a red token is. You should have 17 tokens by now.

The next bomb generator will generate two rolling bombs at once. Jump over them and head forward through a group of henchmen, until you reach a ladder upwards. As you head inside, the room will lock and heli-bots will periodically fly in, dropping bombs from time to time. Hold

and fire the blaster to destroy those that appear, dodging the bombs by moving left or right, and then the hatch will open, allowing you to proceed. Before you do, jump on the hatch that just opened for another red token. Proceed forward through a mostly linear path, destroying the henchmen, and you will encounter a platform with flames rotating around it; jump over the flames and proceed. Eventually, a ladder will be seen on the floor just behind a henchman; drop down to grab the red token and climb back up. You should now have 52 tokens.

Proceed right, shooting the henchmen to create a path forward, then drop onto the conveyor belt, dodging the bombs while picking up tokens, and eventually you will reach an elevator on the right. As usual, shoot the enemies on either side of the elevator and pick up all the tokens, especially the red token that appears on the left. When the elevator stops, head right to a corridor with flamethrowers periodically activating. Wait until a flamethrower stops to head past it, and on the conveyor belt, punch to pick up speed, and pick up the last few tokens. You should obtain all of them in here, before you eventually reach the end of the level.

Side missions in Up Your Arsenal
Community content is available under CC-BY-SA unless otherwise noted.
Advertisement