Return to the Deathbowl
Landstalker Stalkin'
As the Wrench Turns

15 (locations)
Shaar is a planet featured in Deadlocked. Located in the Shadow Sector of the Solana Galaxy, it is a cold planet where various mysterious ancient temples are located in its icy tundra, one signature temple being known simply as the Temple of Shaar. The planet is inhospitable and seems to have been entirely abandoned by any population that once dwelled there. The planet became home to one of many DreadZone battlecourses.

Ratchet and Team Darkstar arrived to Shaar as their first battlecourse prior to the Crusader Tournament. They were tasked with destroying one of the temples of Shaar, a feat that had not previously been accomplished.

Though Shaar has attracted colonists, explorers, pirates, and smugglers, the cold has made the planet inhospitable for all of its recorded history, driving them away.[1] In its history, a civilization built the temples of Shaar, which were protected by warriors known as its guardians.[2] It is unknown if these were a native civilization that had been driven from the world, or were also colonists.

The Temple of Shaar is an immense ancient building surrounded by tall walls, comprising three structures—one at the center, and one each next to the walls—each resembling a spire. These each have a room within the spire, though the central construct has a smaller, hidden room underneath. From the outer walls, some hanging drapes also have emblems embedded in them. Most of the landmark appears to be left intact from its historical origins, though some Vox Industries additions come in the form of a forcefield locking the entrance to the temple.

The Temple of Shaar 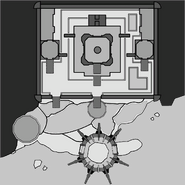 The Temple of Shaar map
Add a photo to this gallery

Locations in the Shadow Sector in Deadlocked
Retrieved from "https://ratchetandclank.fandom.com/wiki/Shaar?oldid=351374"
Community content is available under CC-BY-SA unless otherwise noted.