Screamers[1] are enemies in Ratchet & Clank, appearing in the Kogor Refinery on planet Orxon. They are small, blue creatures with two tiny purple wings, large mouths, and yellow eyes, which fly in the air and wake toxic crabs by screaming if they spot a threat. Ratchet and Clank encountered them during "Explore as Ratchet" along the route to the nanotech dispenser, and "Catch the Infobot" along the route to the infobot. Qwark was also seen holding a screamer during his commercial on an infobot for his gauntlet on Umbris.

Screamers are always found sleeping beside a group of toxic crabs. Upon Ratchet's approach, they will wake up, and proceed to fly towards clusters of crabs, and wake them up. After waking them, they will remain hovering in the vicinity. It only takes a single hit to kill screamers, meaning they can easily be shot by aiming the Blaster before waking up the crabs, allowing Ratchet to silently bypass the crabs. It is also possible to quickly kill them with just the OmniWrench without waking up anything else.

Shooting a screamer through one of the sniper holes unlocks the skill point "Sniper".

Screamers are absent in the 2016 re-imagined game, despite toxic crabs appearing. 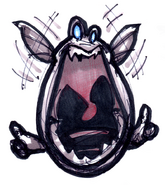 Enemies and bosses in Ratchet & Clank
Community content is available under CC-BY-SA unless otherwise noted.