Start a Wiki
For the multiplayer map, see Sarathos Swamp.

Gleeman Vox (Formerly)
Expansion required
This article is too short to provide more than rudimentary information about the subject. You can help the Ratchet & Clank Wiki by expanding it.

Sarathos was an alien swamp planet with a very gaseous atmosphere. Sarathos was inhabited by Leviathans; the monstrous, and very aggressive scorpion-like beasts that lurk in the swamps. The average Leviathan's monstrous nature was matched only by the King Leviathan, a much larger and more dangerous Leviathan that resided in a combat arena built by the Vox construction team.

Like many other planets in the Shadow Sector, Sarathos was used by Gleeman Vox as a DreadZone challenge course. The challenge course revolved around getting into the combat arena where the King Leviathan resided and destroying it. Ratchet was assigned to this challenge and survived his encounter with the Leviathan horde.

Jellyfish-like creatures could be seen at the edges of the map, flying through the air. Its appearance is similar to those found on Kortog. A planet that looks like Sarathos is seen in the sky from Mukow.

The Leviathan's Lair was an area on Sarathos where the Leviathans lived. The King Leviathan lived here. Juanita jokingly claimed that Ratchet would participate in golf, tennis, fine dining and an agonising death being digested by the King Leviathan.

Sarathosian Swamp Jaggas: Little is mentioned about them except the Bruiser Machine paint job was based on something they wore.

Sarathos has always been a hellish world, which encouraged Sarathos to remain visited as little as possible. The only known activity by sentients were the local Sarathosian Swamp Jaggas, which were native to Sarathos.

That all changed; however, with DreadZone's arrival, who used Sarathos as a battle course for gladiators. Ratchet, Merc and Green were forced to traverse the swampy on a dangerous hunt for a King Leviathan. After battling DreadZone gladiators, Shriekers and Leviathans, the met the King Leviathan at last in a small arena. The trio managed to kill it and thus succeed in the Sarathos death course.

Sarathos being a swampy planet is home to many bioforms, most of these are hostile to Ratchet, Merc and Green. Here are the creatures that are seen are Sarathos and some that are most likely native to this world. 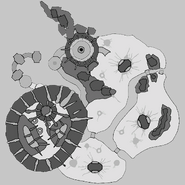 The Sarathos Swamp Romp map
Add a photo to this gallery
Retrieved from "https://ratchetandclank.fandom.com/wiki/Sarathos?oldid=338113"
Community content is available under CC-BY-SA unless otherwise noted.