Ryllus was a plant-covered, fairly inhospitable planet, in the Solana Galaxy. Both the planet's fauna and flora were incredibly dangerous and hostile towards outsiders. It was on this planet that the Technomites built a huge temple were they guarded a map revealing all the planets they had colonized.

Ryllus had a diversity of bizarre plants. The sun was hidden, due to the dense cover of tree canopy, and gave the forests a purple-colored tone. Razorback Cats were native to this planet, as well as the carnivorous Bury Blossom plants. A large number of ruined temples were also some of the features.

Ryllus was a wild planet, teeming with hostile lifeforms of all shapes and sizes. The planet was known to be occupied by a sentient species, known as Pygmy Tribesmans. Even with the sentients, the planet remained in the neolithic age for years.

Ryllus was eventually was discovered by the ancient Technomite race, who built the Ryllus Temple in the midst of the wild Vetega Jungle. As time went on, the Technomites abandoned Ryllus, possibly over a lack of interest in the planet. Technomites still monitor the planet with flying cameras, and their ancient temple is still defended by ancient machines that continue to function.

Ryllus remained relatively unknown, occasionally being visited by offworlders. During the events of Size Matters, Ratchet, Clank and Qwark were lured to Ryllus by robotic kidnappers who left clues about the existence of the Technomites while kidnapping a young girl named Luna. Ratchet and Clank search of Ryllus with a Technomite Artifact led them into the Ryllus Temple. The artifact turned out to be a holographic map of all the worlds colonized by the Technomites, and revealed the possible location of Luna, on planet Kalidon.

Later on, it was revealed that the flying cameras on Ryllus had been watching Ratchet in order to see him in action, so the Technomites could train their Ratchet Clones to fight like Ratchet. It was also here that Otto Destruct fooled the gullible Captain Qwark into believing that Otto was his father.

Ryllus is a jungle world teaming with creatures. Although it had been colonized by the Technomites and Pygmy Tribesmans the sentinent life-forms native to this world, Ryllus in many ways is a wild planet. The creatures here will feast on the local savages and explorers if given the chance. Here are the creatures Ratchet encounters on Ryllus. 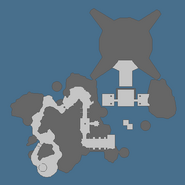 Map layout of Vetega Jungle
Add a photo to this gallery
Retrieved from "https://ratchetandclank.fandom.com/wiki/Ryllus?oldid=320113"
Community content is available under CC-BY-SA unless otherwise noted.