Rogues were large, relentless, ape-like Space Pirates. They liked to jump into battle and shoot explosive cannonballs that rolled and ricocheted around the immediate area, exploding on contact. Some would stand on the ground or, when there was no good footing, they would jump up and find something to hold onto with their magnetic arm. They also occasionally shot out a time bomb that stuck to the ground and expanded a short blast wave on detonation. Moving in close to avoid the explosives was not recommended, as these beasts slammed down their massive arms and sent out a large shockwave that badly injured anyone caught within its radius.

The best way to deal with a Rogue was to throw down a Nano-Swarmer Hive to slowly chip away at its health while continuing to blast it with long-range weapons from afar. Another trick is to step in close so as to trigger a shockwave, then stepping or back flipping away to avoid the attack, then stepping in close to trigger another shockwave. This method would generally take some getting used to but, upon perfection, would guarantee not taking a hit. 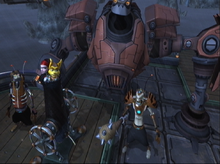 Rogues, like all Space Pirate enemies, were first encountered on planet Ardolis in Tools of Destruction. Through the course of the game, more of them appeared guarding key positions in pirate outposts, being elite soldiers under Captain Romulus Slag. Eventually, one fought on Kreeli Comet revealed his name: Shamus McSoggeybridges. Ratchet and Clank defeated him among other Rogues in order to get to the IRIS Supercomputer.

In Quest for Booty, one Rogue, Sprocket, was shown. He was in charge of the fleet of the deceased Captain Angstrom Darkwater on Merdegraw.

Elite Rogues are rogues with new red armour. They have stronger armour and weapons then regular Rogues. Only two of these enemies appear in Ratchet & Clank Future: Tools of Destruction both at the Ublik Passage.

Retrieved from "https://ratchetandclank.fandom.com/wiki/Rogue?oldid=338187"
Community content is available under CC-BY-SA unless otherwise noted.