Ratchet clones are enemies in Size Matters fought in the Clone Factory on Quodrona. They were created by Otto Destruct using the technomites' technology after extracting Ratchet's DNA on Medical Outpost Omega, in order to form an army for Destructs' nefarious deeds. The majority of the Ratchet clones resembled Ratchet himself, though a few elite variants had some genetic modifications.

Otto Destruct schemed to create the army of clones knowing that Ratchet was superior to any of his own robot soldiers. In doing so, he used Luna to lure Ratchet into a trap, and Luna then oversaw the creation of the clones on Medical Outpost Omega. The clones were produced in the factory on Quodrona, before Ratchet and Clank defeated Otto Destruct. After this, they were each repurposed as an action figure product known as a "Battle Ratchet".

With the ultimate goal to capture the most intelligent beings in the solar system and transfer their intelligence to him,[1] Otto Destruct schemed to create the Ratchet clones using the technomites' advanced cloning technology, after recognizing that his own forces were no match for the famed lombax hero.[2] Luna was used to lure Ratchet into a trap, while cameras followed Ratchet to gather data for the project.[3] After this, Luna oversaw the creation of the first Ratchet clone on Medical Outpost Omega, which was capable of defeating 26 of Destruct's best warriors.[4]

Ratchet was freed from the space station by Clank, and while the two chased down Luna, Otto Destruct was already making clones on Quodrona.[2] Because the Clone Factory itself was miniature, as was typical of technomite size, the clone Ratchets were also technomite-sized.

In "Find Otto Destruct", Ratchet arrived on Quodrona and fought through several of the basic Ratchet clones defending the factory, before confronting Otto Destruct himself. In "Defeat Otto Destruct", several elite Ratchet clones carrying different weapons fought Ratchet and Clank, but were unable to defeat them. Ratchet concluded that Destruct had overlooked how important Clank was, saying that he is "not half as good" without Clank.[5]

After Destruct was defeated, the Ratchet clones were repurposed under the brand name "Battle Ratchet" and sold as "the most realistic fighting toy ever created", with warnings in fine print that they were living creatures.[6] Three of these clones went to Clank's apartment in Megapolis, where Qwark tried to tell them his stories, before they left him as they were uninterested.

The basic clones of Ratchet had the same physical traits as he does, and carried either the OmniWrench or Lacerator as weapons. The main distinguishing feature is the grey technomite uniform they wore, comprising a sleeveless top, gloves, and pants. As Battle Ratchets, the Ratchet clones instead wore no uniform, resembling the real Ratchet.

A few elite Ratchet clone variants had genetic modifications that changed their appearance. One such variant had a lean, slim body with enlarged feet, carrying a flamethrower, with a much faster running speed. Another variant was a bulkier clone with greater muscle mass and higher durability, carrying a shotgun, but moving more slowly. A third variant sold as Battle Ratchets but not fought on Quodrona had larger arms and hands, carrying oversized wrenches.

Little is known of the Ratchet clones' behavior or cognitive ability, as it is unclear what cloning process was used. The Ratchet clones appear capable of using all of Ratchet's moves, although are never shown jumping nor speaking. They also appear to follow Otto Destruct's orders without question, and were sold as products, suggesting they have little autonomy or intelligence. 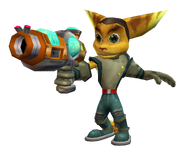 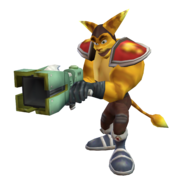 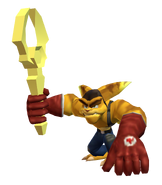 Giant hand clone
Add a photo to this gallery

The standard clones using OmniWrenches have a limited range, unlike those using the Lacerator, but those lack a high rate of fire. In both cases they can be relatively easily outmameuvered and taken down. The flamethrower and shotgun-wielding variants are not too different either; while the former will be fast, they cannot move while firing their weapon, and have less health to make up for their speed. They also backflip if you attempt to hit them with the OmniWrench. The latter are relatively slow, but a lot sturdier, and have a shotgun with a large spread. Nonetheless neither have a very high range, meaning they are relatively harmless if you manage to keep away.

In terms of combat the Shock Rocket with the After Shock Mod is the best offensive weapon available, next to the Laser Tracer (provided it is on the PlayStation Portable version). The Static Barrier is nearly mandatory, even if it will at best take only one or two hits, as the clones deal a lot of damage even when using the best armor. The few autonomous and upgraded weapons you might possess at this point in the game are also sufficient for dealing with the larger groups encountered, as well as the elite clones. In particular the Acid Detonator, Killer Bee Mine, and Agents of Dread are recommended, especially when upgraded with the available mods.

The third Ratchet clone variant carrying the large hands was intended to be fought in "Defeat Otto Destruct". This clone was never developed further than the art stage, because all three clones had shorter-ranged weapons, meaning the Lacerator clone was reused instead for challenge variety.[7] Thus, the clone only appeared in the final cutscene, and the High Impact Games Treehouse.

Enemies and bosses in Size Matters
Technomites
Retrieved from "https://ratchetandclank.fandom.com/wiki/Ratchet_clone?oldid=342636"
Community content is available under CC-BY-SA unless otherwise noted.