The game is a short adventure taking place directly after Tools of Destruction, in which Ratchet is on a search to find and rescue Clank from the Zoni. His search leads him to planet Merdegraw. Ratchet and Talwyn travel to the planet, after learning from the IRIS supercomputer that a pirate named Darkwater, who was an expert on Zoni culture, had possessed an Obsidian Eye that can be used to find Clank, The two then found themselves caught up in a battle against the Space Pirates while searching the grave of Captain Darkwater to find what they sought after if they were to find Clank.

Quest for Booty uses very similar gameplay to Tools of Destruction, with all weapons originating from the latter. It mainly differs in that Ratchet is without Clank, and now makes of an OmniWrench Millennium 12, which contains a kinetic tether allowing him to move obstacles and manipulate objects, while also allowing him to pick up and throw items with the wrench.

In June 2011, after the PlayStation Network outage, the game was part of the European Welcome Back package, and was downloadable for free for one month. A download code was provided in all physical copies of Ratchet & Clank: Into the Nexus.[1]

Quest for Booty is a third dimensional action adventure game with elements of shooting, platforming, and puzzle solving, in which the player controls Ratchet, a lombax searching for his friend Clank (who is not playable). Its gameplay is very similar to Tools of Destruction, though it features more platforming and puzzles with the OmniWrench Millennium 12, which allows Ratchet to pick up and throw objects as well as manipulate them from a distance. This allows Ratchet to pick up creatures known as Heliogrubs to light up a dark area, or to use the kinetic tether to move objects allowing him to traverse across a path.

The game reuses weapons from Tools of Destruction. Ratchet begins with the Combuster, Fusion Grenade, Tornado Launcher, Shock Ravager, Predator Launcher, and Nano-Swarmers, all at V3 and upgradable to V5. The Alpha Cannon can be purchased from the Smuggler, coming at V5. While Raritanium weapon upgrades do not exist, the special modification for each weapon previously available as Raritanium upgrades can now be found hidden in certain areas. The gadgets, aside from the OmniWrench Millennium 12 are the Swingshot, Grind Boots and Gravity Boots, all available immediately.

Unlike previous entries, there is no challenge mode.

Quest for Booty continues a year after Tools of Destruction with Ratchet and Talwyn Apogee searching for Clank, and is set on planet Merdegraw in the Polaris Galaxy. Merdegraw is a tropical planet filled with several small islands out in its Azorean Sea. The largest inhabited island is Hoolefar Island, home to the hoolefoids, a friendly race who are led by Mayor of Hoolefar Island, Barnabus Worley. Other islands visited are either controlled by or contain ruins of dead Space Pirates, such as Morrow Caverns, Darkwater Cove and Lythoin Caves. These islands often contain relics and old treasures of the dead pirate captain, Darkwater.

Ratchet and Talwyn arrived on a Pirate fleet on Planet Merdegraw. As revealed to by Rusty Pete in a prologue, the pair traveled to Merdegraw after learning from IRIS of a pirate named Darkwater, who was an expert on Zoni culture. They encountered Rusty Pete holding the head of Captain Romulus Slag, who was apparently still not over his Captain's death. Pete's sudden outcry of surprise at seeing Ratchet and Talwyn attract the attention of the pirates. The leader of the pirates, Sprocket, told the pair that Darkwater was dead and proceeded to shoot Ratchet out of a cannon, only to have him land on an adjacent pirate ship. Ratchet and Talwyn managed to fight their way through various ships but were inevitably captured and thrown into another cannon. Sprocket commanded the pirates to blast them towards Morrow Caverns before Rusty Pete intervened. Pete disguises himself as Captain Slag by putting his head on and manages to fool the pirates into shooting Ratchet and Talwyn towards Hoolefar Island, where they 'would find exactly what they were looking for'. Sprocket agreed and the pirates blasted Ratchet and Talwyn towards the island.

Ratchet woke up on the shore of Hoolefar Island and saw Clank suspended in mid-air in a blue energy field, asking if he was alright. Before Ratchet could grab him, Clank disappeared just as Talwyn landed next to him. Ratchet was convinced Rusty Pete sent them to the island for a reason and traversed the wilderness before reaching another beach. The pair were greeted by Barnabus Worley, the Mayor of Hoolefar Island. Mayor Worley told them their supply beacon didn't work, meaning that communication with Pete (or anyone else for that matter) was impossible. Ratchet offered to fix the five wind turbines and managed to connect the power couplings by using a Versa bolt bought from the Smuggler. During the repairs, Talwyn told Ratchet that the villagers talked about a "curse" but did not give any more details.

After fixing the beacon, the Mayor showed Ratchet the Obsidian Eye, the most powerful lorernthzian telescope in the known universe. Darkwater apparently built it to keep in contact with the Zoni. Unfortunately, the Eye didn't work as its power source; the Fulcrum Star, was with Darkwater's body in Morrow Caverns. Darkwater wrote in his journal that he had cursed his body so that anyone who disturbed him would resurrect himself and his crew, explaining why Talwyn mentioned such a curse before. Rusty Pete arrived at the island and told them of Darkwater's ship, offering to take the pair there. Pete brought them to Morrow Caverns, where Talwyn accidentally became trapped behind an old door. Ratchet then had the choice of promising to save her or not, prompting a response from Pete.

After navigating through the caves and across the old shipping rails, Ratchet found Darkwater's dismembered head on the ship and picked up a map which fell out of it. Rusty Pete boarded the ship as well and offered to check for booby traps. He suddenly stuck the head of Captain Slag on Darkwater's body and an eerie green light was cast all over the caverns. Slag was now in control of the body and kicked Ratchet off the ship, but true to his journal, Darkwater's cursed spirit also inhabited it, meaning the two enemy pirates had to share the body between each other. As Darkwater's crew begin to rise from the dead, Ratchet made his way back to the barge they came on and had a choice to free Talwyn or run from Morrow Caverns. Regardless of his choice, Ratchet returned to Hoolefar and had to defend the island from Slag/Darkwater.

If Ratchet rescued Talwyn, she aided him in the fight against the undead Pirates. If Talwyn was left behind, she returned to the island using her booster pack, angry at Ratchet for leaving her and claiming she knew how Clank must feel. Ratchet then approached the Smuggler to decipher the map he found in the caverns. The map lead to Darkwater Cove, an island where Darkwater hid all of his treasure. Ratchet and Talwyn were taken there by the Smuggler and managed to fool the many robotic security bots into thinking Ratchet was Darkwater. The pair managed to get to the treasure room where Ratchet noticed the Fulcrum Star and immediately ran towards it. Suddenly, a trap door opened up and he fell down into the Lythoin Caves. Slag/Darkwater appeared and took Talwyn as a prisoner before locking Ratchet inside.

Ratchet escaped from the caves and with the Smuggler's help, flew to Slag/Darkwater's fleet in Azorean Sea. He freed Talwyn from her cell and the pair confronted Slag/Darkwater. After a long battle spanning across many ships in the fleet, Slag/Darkwater was defeated, breaking the curse that brought the pirates back to life. Slag's head fell into the sea and Rusty Pete dropped the Fulcrum Star to jump in after him. Ratchet grabbed the Star and headed back to Hoolefar Island to power up the Obsidian Eye.

If X is the coefficient of A squared minus the improbability of the hypotenuse of absolute zero, the Bogon index of the denominator must be equal or lesser to the number of bees in your bonnet.

The Eye showed Clank surrounded by three Zoni floating in a beam of light. Clank woke for a brief moment and began to talk gibberish, indicating something bad had happened to him. The Zoni told Clank "The Doctor" was coming to fix him just as a door opened and a mysterious figure descended down the stairs. The figure suddenly slipped on a misplaced feather-duster and fell down before gathering himself up. The figure was revealed to be Dr. Nefarious, who proceeded to shout for his butler, Lawrence. The coordinates lead to the Breegus Nebula and Ratchet vowed to rescue Clank from Nefarious and the Zoni.

Meanwhile, out in the Azorean Sea, Pete had just finished telling the story of the game to Captain Slag's head while the two of them drifted aimlessly on a wooden crate. Slag got angry and ordered Pete to start rowing to the nearest island.

Quest for Booty was a short project developed by a small team, with the plan being to make a concise and compelling game without making too many new assets, which led the team to use the space pirates from Tools of Destruction as a base.[2]

Quest for Booty was announced in E3 2008, announced as a shorter, bite sized title that would appeal both to fans of the previous games and work as an introduction to the series.[3] The game was released a few months later.

The inclusion of "I'm a little teapot" when Slag opens doors led to lawyers contacting Insomniac, though the team settled out of court.[4][5]

Quest for Booty received overall positive reviews. Reviewers praised the visuals and gameplay and found it a tightly-focused game with good pacing, while criticizing the short length, lack of new weaponry, and missing series elements, such as Clank and Captain Qwark.[8][9][10]

Due to the small development team and short development time, the game was one of Insomniac's biggest returns on investment.[4][5] 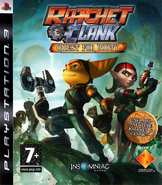