Singleplayer, multiplayer (Up Your Arsenal)

Blu-ray disc
PS Vita game card
PSN digital download
The Ratchet & Clank Collection (known in PAL regions as the Ratchet & Clank Trilogy) is a compilation of the first three main installments in the Ratchet & Clank series (Ratchet & Clank, Going Commando, and Up Your Arsenal) remastered in full 720p HD with support for 3D graphics and PlayStation Network trophies. It was released in June 2012 for the PlayStation 3, and in July 2014 for the PlayStation Vita (as a download-only title in North America). The compilation was ported by Idol Minds to the other platforms, and the release was published by Sony Computer Entertainment with the Classics HD title. On PlayStation Vita, it was released as a download-only title. The collection also includes the multiplayer in Up Your Arsenal.

The collection includes the three games in remastered 720p at 60fps and 720p Stereoscopic 3D support at 30fps. Their gameplay remains almost identical to the original, with a few intentional modifications such as fixing exploits or providing additional content, as well as unintentional such as bugs introduced by the remaster. The draw distance of all non-player characters are improved across all three games, allowing further viewing.

The controls for all games are identical on the PlayStation 3 release, though the Vita controls have a few changes to account for the system's different button maps. The Vita version also allows players to navigate the pause menu with touch controls, and the Select map will also be moved around if the player slides their finger above it.

Idol Minds developed the port of the games, which were originally created for PlayStation 2 specifically around its hardware. Insomniac Games developers Mike Stout and Tony Garcia, who worked on the original games, speculated later that such hardware specificity would have created major difficulties for Idol Minds due to how many hacks were required and how much was based on the physical location of memory on the PS2 discs. Insomniac had to ensure data was written on the right section of the discs for it to load faster, and had targeted a five second load time from when Ratchet takes off from his ship to when he lands on the next planet. As such, the game being optimized specifically around being a PlayStation 2 DVD and not a PlayStation 3 blu-ray (or digital copy) would have likely caused problems for them. This also led to minor issues, such as the HelpDesk mesage loading slightly after the HelpDesk box appearing.[1]

The collection was officially announced by Insomniac Games on 15 March 2012.[2] Insomniac Games announced during the reveal of the Collection that there will be worldwide surprise for the 10th anniversary of Ratchet & Clank, which was revealed later to be the release of Full Frontal Assault.[2] To compensate for the gap between the PAL and NTSC releases, North American fans received another surprise as part of the release, which was later revealed to be a Demo of Thieves in Time and a special Ratchet & Clank 10th anniversary avatar.[3]

A separate high-definition remaster of Deadlocked was released on the PlayStation Store on May 21, 2013.[4]

The instruction manual for the Ratchet & Clank Collection outlines a plot for the compilation. After returning home after the events of All 4 One, Clank accessed his data files and showed them to Ratchet and Qwark, who watched the events of the original Ratchet & Clank. Qwark stated that the story was only good because he, as the galaxy's greatest hero, was in it.

Angela Cross also appeared to visit Ratchet and Clank and stated that she wished to go on another adventure with them sometimes, with Ratchet joking about how dangerous their last one was. They then proceed to watch the events of Going Commando.

Clank then met with Dr. Nefarious and they insulted each other before the group watched the events of Up Your Arsenal.

The Ratchet & Clank Collection received generally positive reviews.[5][9][7][8] The majority of praise from the compilation came from the fun, original gameplay that critics felt aged well, and for the good quality upscaled graphics.

IGN praised the games for having aged well, and said it was fun to see Ratchet and Clank evolve as a team throughout the adventure.[9] Eurogamer rated the collection as 9/10 and stated that criticisms were "hard to find and even harder to make stick".[7] Game Informer awarded the collection a 9.25 out of ten, particularly praising the control scheme of Up Your Arsenal.[8]

Gaming Bolt was one of the publications to mention the 3D options of the game in a review. They claimed that it was a stable experience but did not add anything to the collection and questioned why it was added to the game.Mudgal, Kartik (2012, July 3). "Ratchet and Clank HD Collection Review". From IGN. Archived from the original on 15 February, 2021.

The PlayStation Vita report received slightly less positive reviews.[6] It was praised for maintaining a smooth framerate, but some critics noted disappointment at the ability to cross-save with the PlayStation 3 version, and at small audio bugs.[9] 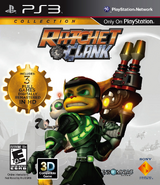 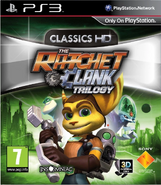