None (unless you include the Ratchet Clones and Otto Destruct)

Otto Destruct
Quodrona was a volcanic planet with an apparently abandoned city remains. It was here Otto Destruct had his base for operations. The planet is seen in the Technomite Map Room on planet Ryllus, proving that it is, or was sometime, inhabited by Technomites. Emperor Otto had his Ratchet Clone Factory built on this planet underground, where most lava caves of the planets were. He had a training camp for the Ratchet Clones located here as well. Ratchet also could buy the Laser Tracer here. 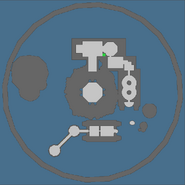 Map layout of the Clone Factory
Add a photo to this gallery
Retrieved from "https://ratchetandclank.fandom.com/wiki/Quodrona?oldid=312296"
Community content is available under CC-BY-SA unless otherwise noted.