Ratchet & Clank Wiki
Register
Don't have an account?
Sign In
Advertisement
in: Gadgets in Ratchet & Clank (2002 game), Items in Tools of Destruction, Items in A Crack in Time,
and 2 more
English

In other releases, the O2 Mask is available from the start. The Megacorp Helmet in Going Commando and Up Your Arsenal provides the same functionality as the O2 Mask. 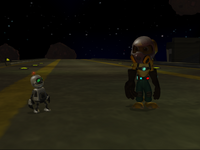 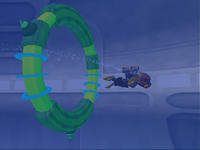 Ratchet wearing the O2 Mask on foot and while underwater.

The O2 Mask was mentioned in Deadlocked as a gadget used by King Claude in order to fight for DreadZone.

A redesigned, smaller O2 Mask fitting the face and mouth appears in the 2016 reboot. It is acquired in the same place on Pokitaru, though it is found in the pumping stations as an optional item rather than through the main path. The weapon also does not allow Ratchet to visit Clank's area in the Blarg Tactical Research Station, as this is too small for him to fit through.