watch 06:24
Ratchet & Clank - Planet Novalis Gameplay
Do you like this video?

The Rescuer
Novalis is a small terrestrial planet in the Solana Galaxy featured in Ratchet & Clank, the re-imagined game, and movie. The planet is home to the Plumber, and it was the first planet visited by Ratchet once Clank allowed him to use his ship. The Tobruk Crater was the area the two explored. Comprised of mostly water, caves, buildings, and greenery, Novalis features renowned sewer systems, which made it one of Chairman Drek's targets for destruction.[1]

In the original release, when replaying the game, it features a gold weapons room.

Novalis is renowned for its sewer systems and food known as the jabo sandwich.[2] When Ratchet and Clank crash landed on the planet, most of the buildings were in ruins, and the citizens had largely fled the planet on escape transports.

As Chairman Drek wished to extract a portion of Novalis for his new planet, he sent the planet a broadcast outlining his plan, offering them no choice, as doing so would cause a change in mass that would cause the planet to spin out of control and drift to the nearest star and explode. The planet's chairman Agnogg Buckwash spoke out against Drek, who instead gave the chairman no choice and went ahead. Later, Ratchet and Clank traveled to the planet after Clank presented Ratchet an infobot of Drek's plan, and the two aimed to help the population.

After crash landing, Ratchet and Clank resolved to search the place for a new ship. Most of the population had fled the planet, making it difficult to leave. In "Find a new ship", the two went into the city itself and encountered the chairman, who mistook them for more attackers. The chairman presented the two an infobot containing a commercial featuring Qwark for Al's RoboShack on planet Kerwan. After the two revealed that they were simply in need of transportation, Buckwash left the two one of his courier ships before leaving.

The duo also explored the waterworks and found the Plumber, who was fixing pipes but claimed to be unable to afford to flee the planet. He gave the two an infobot for Aridia, containing an emergency broadcast of Skid McMarx and his agent in a space attack that sent their ship hurling down towards the planet.

Captain Qwark's recount of events contained only a few differences. Ratchet and Clank crash land on the planet after being shot down by a blarg saucer, while originally on their way to Kerwan. Their ship is damaged, but not completely destroyed, and they must search for a way to repair it. The planet is under attack from the blarg due to Agnogg Buckwash's nephew Skidd McMarx accidentally revealing secret blarg planets for the hydroharvester on Aridia.

Agnogg Buckwash and the Plumber's roles are switched. After rescuing Agnogg Buckwash in the mission "Defend the planet" instead grants the two an infobot for Aridia, showing a different transmission from Skidd McMarx, his nephew. The Plumber, after the mission "Find someone to help you repair your ship", grants an infobot with coordinates to Kerwan for free (which contains a transmission from Chairman Drek about his invasion of the planet), and repairs their ship, provided the two saved Mayor Buckwash. Qwark tried to claim that Ratchet, Clank and the Plumber would fight a "brain-eating zombie T-Rex", though Shiv Helix interrupted the story as this was blatantly untrue.

Later, Novalis was destroyed by the Deplanetizer to use pieces of the planet for New Quartu, after the Galactic Rangers failed to stop him. The planet's population of 43,618,924 had been entirely evacuated.

The Tobruk Crater is a large impact crater, with several smaller impact craters situated throughout the area itself. Tall cliffs and mountains dot the surrounding landscape, partially the remains of the initial impact. A landing pad is located on top of a small cliff plateau, from where one can access a Gadgetron vendor, the waterworks, and sewer system, as well as a small cave system and an elevator platform that leads to the ground level of the area. A city stands in the distance, several buildings of which are in flames. The player can explore part of the Tobruk Crater, the waterworks nearby their ship, and two different caves location in the area.

Only part of the area is visited, namely only both sides of the river and a suspension bridge spanning it. The city at the edge of the crater consists only of a visible fifteen or so structures, positioned close to the edge and on top of the cliff wall, likely continuing on further behind it. The river stems from two sources, one from somewhere underneath the city, and another from somewhere on top of the cliff. Both streams merge shortly and then flow to some place beneath the waterworks.

Past the river lies a tall, natural barrier that effectively splits the crater in two, leaving the other half inaccessible. Regardless, there are three large craters here, as well as a few structures, trees, and a single river, larger than the first. One crater is entirely flooded by an even larger river, a second is only partially flooded, and a third remains dry and has a tall tower and two smaller buildings within.

The accessible area is home to lush vegetation, with several different plant and mushroom species, as well as a number of trees, some of which have been cut down, leaving only the stumps. Numerous tiny craters dot the landscape as well. An aforementioned bridge connects the two riversides, though it is partially damaged by a blarg bomber. On the other side, the path eventually leads to a large crater, devoid of vegetation, in which a hidden extendable bridge can be found, acting as a shortcut to the other shore. 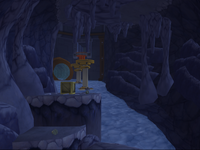 The entrance to the waterworks. 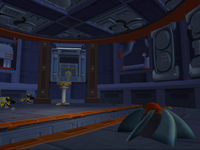 The interior of the waterworks.

The waterworks is only accessible by using fallen stalactites as platforms, avoiding a fast-flowing current of water leading down a tunnel. At the rear end of said tunnel is a doorway that leads into the actual waterworks, an intricate system of hydraulics, pipes, and several canals with fast currents of water. A lone walkway near the ceiling eventually leads to a large room situated on top of the cliff face, with a large glass window overlooking the entire area. The source of the stream of water at the entrance begins here, making this a route for a quick exit. 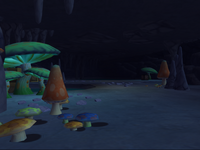 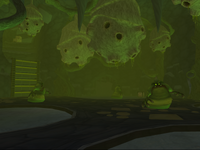 Two separate cave systems are hidden within Tobruk Crater. The first cave is accessible from the landing pad, by two doors typically closed by bolt cranks. Within are several different varieties of rather large mushrooms, which drop bolts when destroyed, as well as a series of water basins.

The second cave is accessed by swimming upstream, turning left at the split, past the suspension bridge. Using the Hydro-Pack, one can swim through the water current and enter an underground area. A sickly green tint taints this cave, and it is infested with a small number of amoeboids.

The layout of the area Ratchet visits in Qwark's version of events is almost identical, with the only major difference being that the second secret was removed. Aside from this, the layout has a few minor differences: a gold statue of Galactic Ranger Cora Veralux is added in the first area before the bridge, the bridge connecting Mayor Buckwash' ship to the starting area is activated by a button, and the entrance to the waterworks features wall jumps rather than steps.

Concept art of the bridge area from the re-imagined game.

Concept art of a building from the re-imagined game.
Add a photo to this gallery