Nanotech is a recurring technology serving as a gameplay element in the Ratchet & Clank series. It is a technology that consists of tiny nanomites (nanobots) that live within organic life forms, robots, and other technology such as weapons[1] and armor, to perform repairs and healing, or other functions such as weapon upgrading. Nanomites are also absorbed from defeated enemies: the more powerful the enemy, the more nanomites are absorbed.

Aside from serving as health, nanotech also allows weapons to upgrade. Nanomites absorbed from defeated enemies are used within weapons to upgrade; this is indicated by a weapon's level meter which, when filled, improves the weapon a level until it reaches its maximum.

In the original Ratchet & Clank, nanotech exists solely to replenish Ratchet and Clank's health. Ratchet can initially carry a maximum of four nanotech, and each hit takes away one nanotech. At the Kogor Refinery on planet Orxon, Ratchet found a nanotech dispenser in "Explore as Ratchet", from which he could purchase supplements developed by the blarg[3] that, when drank, would expand his maximum nanotech. These supplements were Premium Nanotech for 4,000 bolts, bought in the mission "Buy the Premium Nanotech", which expanded his maximum nanotech to five, and the Ultra Nanotech for 30,000, which expanded it to eight, purchased in the mission "Buy the Ultra Nanotech". Clank's maximum nanotech, however, remains at four.

Nanotech is replenished by breaking nanotech crates, which restore a single nanotech.

In Going Commando, Ratchet is suited with commando armor from Megacorp that allows him to absorb nanomites from defeated enemies. This allows Ratchet to increase his maximum nanotech beyond the initial four up to 70. Each time the maximum capacity expands, it fully replenishes and causes a flash of electricity that damages (and in many cases destroys) all enemies on screen.

For the first time in the series (and it will be a staple since), the damage Ratchet takes now depends on the enemy who attacks him or the hazard he touches.

Ratchet's nanotech can expand 10 times more up to 80 with hidden nanotech boosts. 10 of these can be located throughout the game: one on Endako, one in the Feltzin System, one on Notak, one on Tabora, one on Dobbo, one on Joba, one on Todano, one on Boldan and one on Snivelak. These are necessary for obtaining the skill point Nano to the max!.

Nanomites are also absorbed by weapons, allowing a weapon to pick up nanomites by defeating enemies with it. After a weapon's upgrade bar is full, it upgrades to a new, more powerful weapon. This applies to all weapons developed by Megacorp with the exception of the Zodiac and the Clank Zapper. A second upgrade can be purchased at Megacorp vendors, upgrading the weapons to Mega versions which can be upgraded with nanomites a third time to reach maximum capability.

Up Your Arsenal features a similar nanotech system to the previous entry, with nanomites having a more opaque appearance. The main differences are that the maximum nanotech is changed to 100 (expandable to 200 in challenge mode, while Clank's remains at 4 throughout), that the OmniWrench's power increases with it, and that the flash of electricity that previously occurred every time Ratchet's maximum nanotech capacity increased instead occurs every 10 times it increases. Ratchet's nanotech began at 10.

Nanotech is restored from blue nanotech crates, which now restores 20% of Ratchet's nanotech or one unit of Clank's nanotech. An item called the nano-pak can also be acquired from Zeldrin, which stores unneeded nanotech obtained from the world and releases it to the user when their nanotech is low.

Nanomites are absorbed to upgrade weapons once again, but can now upgrade four times from level 1 through to 5, in which the first four upgrades incrementally improve the weapon while level 5 drastically transforms it. In challenge mode, once a weapon reaches level five, the Mega version can be purchased to upgrade it three more times, to Giga, Ultra and finally Omega at V8. This applies to all Gadgetron and Megacorp weapons with the exception of the RY3NO which can only be upgraded to level 5.

In multiplayer, players have non-upgradable nanotech which can be restored with nanotech crates or by standing on nanotech pads in Siege mode.

Contestants in Vox Industries' DreadZone combat sports show in Deadlocked standardly come with a dose of medical nanotechnology. If injured, nanobots will attempt to keep combatants in fighting shape even when heavily wounded, until they actually die. Robotic and biological gladiators employed by Vox Industries' themselves also come with these nanobots, and when slain they automatically transfer to a new host (the killer). As such, the more enemies a contestants kills and destroys, the more nanobots they have, and the more maximum hit points they can sustain (up to 99, or 999 in challenge mode).[4]

Vox Industries' weapons also come with a standard nanotechnological self-upgrade system[5], allowing them to absorb nanobots from slain enemies, and upgrade to a maximum of V10 (V99 in challenge mode). The XP Mod also notably improves the rate at which you absorb nanobots, allowing for even faster growth.

Nanotech crates release medical nanodrones, which reinforce the existing nanotech already present. They mend wounds, replace lost energy, and fight infections.[6] The NanoLeech Mod also rarely can cause enemies to drop nanotech health orbs when defeated. Unlike previous games nanotech in Deadlocked only restores a fixed percentage of your maximum health, depending on the difficulty being played at.

In Going Mobile, Ratchet has 20 nanotech with health laid out in the style of Going Commando, but cannot be upgraded. Weapons can be upgraded to V3.

In Size Matters, Ratchet's nanotech begins at 5, and can reach a maximum of 50 (up to 75 in challenge mode). Leveling up increases his nanotech by one each time, and will replenish his health entirely each time it happens (but won't destroy any enemies). His weapons have four levels from V1-4, and a Titan upgrade to upgrade them from V5 to V8.

As usual, Clank does not obtain any experience, and his maximum level changes depending on when he is on foot, battling in arenas, or when transformed in Giant Clank.

Secret Agent Clank gives Clank, Ratchet and Qwark a nanotech level, where Clank and Ratchet can upgrade their levels by defeating enemies. Ratchet starts with 20, and has a maximum of 90. Clank starts with 15 and it can goes up to 85. Both increments their level by 1 nanotech at a time, and refill their energy bars. The weapons upgrade is in an identical fashion to Size Matters, though Clank's weapon upgrades are known as Proto upgrades rather than Titan upgrades.

Nanotech stored in crates act and appear different than in prior games. When a nanotech crate is broken, the nanotech breaks into smaller Nanotech orbs. Ratchet or Clank can collect as many or as few of these orbs as he needs, meaning that if he is near maximum health most of the Nanotech doesn't get wasted. Ratchet can also fully restore his Nanotech by accessing a GrummelNet vendor.

Weapons can be upgraded to level 5, and in challenge mode, an Omega version can be purchased to allow them to upgrade five more times to Level X (10).

Clank's Robo-Wings, granted to him by the Zoni, uses zeptotech, a superior form of nanotech which is smaller.

In Quest for Booty, Ratchet's maximum nanotech capacity is 20 units. Upgrading Ratchet's nanotech also releases a flash of energy that destroys nearby enemies and refills health.

Weapons, as in Tools of Destruction, can be upgraded up to level 5, though there are no Omega upgrades as there are no vendors or challenge mode.

In A Crack in Time, Ratchet again has upgradable nanotech. Ratchet gains experience points (representing absorbed nanomites) by defeating enemies or collecting Zoni, and filling a bar improves Ratchet's nanotech up to a maximum of 199. Each level up, or Zoni collected, will replenish Ratchet's health entirely.

As with Tools of Destruction, weapons can be upgraded up to level 5, and in challenge mode, an Omega version can be purchased to allow them to upgrade five more times to Level X (10).

In All 4 One, Ratchet, Clank, Qwark and Dr. Nefarious all have nanotech as their health, though they do not absorb nanomites and it is not upgradable. Ratchet's maximum nanotech level is four. Nanotech can be found in nanotech crates, and when a teammate is low on nanotech, another player can use extra nanotech that has been stored to heal them.

Unlike previous games, weapons cannot be upgraded using nanotech as nanomites are not absorbed.

In Into the Nexus, Ratchet once again has upgradable nanotech, and can upgrade it up to a maximum capacity of 200. Clank's nanotech, when traveling through the Netherverse, is at 10.

Ratchet's weapons can be upgraded twice up to V3. Obtaining the Omega version in challenge mode allows it to be upgraded further to V6.

Nanotech is seemingly used to upgrade Ratchet's weapons. Weapons can be upgraded up to a maximum of V5. Omega weapons in challenge mode further upgrade to V10. 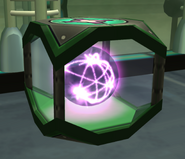