Ratchet & Clank Wiki
Register
Don't have an account?
Sign In
Advertisement
in: Locations in Up Your Arsenal

Battle your way to the launch site
Defeat Dr. Nefarious
Defeat the Biobliterator

Lawrence trophy
Mylon is a planet in the Solana Galaxy featured in Up Your Arsenal. It is a heavily industrialized planet that was the location of the command center, a fortress from which Dr. Nefarious stored his second Biobliterator, which had a launch site made of distant islands. The fortress was well-guarded by Nefarious' robonoids.

Ratchet and Clank traveled to Mylon after learning of the existence of the second Biobliterator. Once there, they fought through Nefarious' minions of tyhrranoids before finally confronting Dr. Nefarious himself, and then the Biobliterator.

The command center on Mylon was Nefarious' master control center. When Al decoded the master plan and learned that a second Biobliterator model was constructed in secret, Sasha Phyronix theorized that it was located on Mylon, guarded by Nefarious' army.[1] Based on this information, Ratchet and Clank traveled there, to find that this was indeed the case.

In "Battle your way to the launch site", Ratchet and Clank fought through an army of robonoids, and caught up with Nefarious and Lawrence. The two immediately teleported to the Biobliterator and flew away. Sasha sent the Ranger dropship to take them to catch up with it.

Following this, in "Defeat Dr. Nefarious", Nefarious initiated the Biobliterator's launch sequence, setting a course for Veldin. Ratchet HALO jumped above the launch site, and managed to destroy the device controlling the launch. Nefarious asked for Lawrence to annihilate Ratchet, though Lawrence was at the time unavailable, and responded with a holographic voicemail, causing Nefarious to fight Ratchet himself.[2]

After taking some damage, Nefarious first pretended to plea for mercy, distracting Ratchet temporarily before he flew off to another island on the launch site, sending soldier bots to slow Ratchet down. A few Galactic Rangers teleported in to provide Ratchet backup, and he eventually defeated Nefarious.

Eventually, they destroyed the second Biobliterator, causing a reactor detonation. Nefarious asked Lawrence to teleport the two away, without specifying a destination. Though the Biobliterators' computer reported that it would detonate in sixty seconds, it detonated much earlier.[3] Nefarious and Lawrence had managed to teleport, but only to an asteroid, stranding them in space as they soon enough were out of range of any planet.[4] 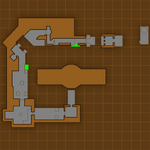 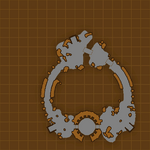 Mylon has a dark red atmosphere, reflected on the red liquid making up its vast oceans. It has little land, with only a small continent as seen from space, and both the command center and the launch site are spread thin across barely-connected, industrialized islands. The planet seems mostly barren, as it has little in the form of vegetation, and all its inhabitants are robots.

There are two areas visited on Mylon: the command center, a cluster of buildings around a few islands where the Star Explorer lands, and the launch site, a barren archipelago of islands filled with waste, where both Nefarious and the Biobliterator are fought.

The command center is visited during the mission "Battle your way to the launch site". It is a heavily industrialized area comprising several immense buildings resembling factories built across a cluster of islands. Most of these buildings are tall and imposing, often containing large moving machinery, and connected by immense cables linking the buildings. Out in the oceans are offshore structures that resemble oil rigs, and in the sky, tyhrranoid dropships are seen flying above the area. The Biobliterator charges above one of the structures.

The Star Explorer lands on an elevated pier out in the ocean, overlooking the entrance to one of the center's smaller buildings. Adjacent to this building is one of the taller towers, climbed using a grav-ramp on the side, with a corridor on the roof leading up to a higher ledge reached using a ladder, and then an elevator down to a lower balcony. On the edge of this balcony is a larger structure surrounding the Biobliterator charging station, with rooftops overlooking it, and three rooms in between each of its points.

The launch site is the location of both "Defeat Dr. Nefarious" and "Defeat the Biobliterator". It comprises four islands, joined together by bridges and structures, located away from the command center, which can be seen in the distance. The islands are also surrounded by offshore structures and contain ruined pieces of large robots that vaguely resemble Giant Clank. They form a circular shape when linked together.

At the southern end of the launch site is a circular arena surrounded by a moat between its walls. The arena has short bridges leading out to two adjacent islands, both of which contain hangars and robot debris. At the end of each island, long bridges with bends lead up north to two small islands connected by a single bridge. During the battle against Nefarious, only the eastern portion of the launch site was available, and bridges to the western side were out, though the entire area was available during the Biobliterator fight.

The level design was a collaborative effort between Colin Munson and Mike Stout. Munson designed most of the level, while Stout designed the Refractor segment. This was because the two had swapped work, as Stout preferred working on puzzles, while Munson preferred enemy segments.[5] The goal for the level was to straddle the line between giving the player a challenge and making them feel powerful with all the equipment they'd gathered over the course of the game. The level was programmed by Tony Garcia among others,[6] who also programmed the Dr. Nefarious boss fight.[7]

The Tyhrra-Guise section caused controversy among the developers. Originally, the Tyhrra-Guise challenge would begin immediately after the grav-ramp, where the player would reach the top of the grav-ramp and immediately be hit by turrets, causing them to die as they did not think to use the Tyhrra-Guise. Mike Stout, who designed the Tyhrra-Guise, was told by his superiors that the turrets should simply be removed, while Tony Garcia, who was programming the level, believed removing the turrets meant the challenge was pointless. As there were no more playtests afterwards, Stout was unsure that Garcia's method would work, leading to a bitter argument that ended up in Stout's employee review. The final design is a compromise, in which players would reach the top of a grav-ramp, and have a forcefield before they could move forward, giving them time to use the Tyhrra-Guise.[8]

Garcia programmed the Nefarious boss fight.[7] A lot of effort was put into it, and it was later decided that a second boss battle with the Biobliterator would be included. Many of Insomniac's developers had the vision that it would be the "true" final boss fight, with more put into it and a complicated AI used for Qwark. This was not achievable, as the programmers did not have enough resources to expand the second fight greatly.[9]

Locations in the Solana Galaxy in Up Your Arsenal
Community content is available under CC-BY-SA unless otherwise noted.
Advertisement