Commanded robot
Microbots are small robots in Going Commando, manufactured by Megacorp. They can be given commands by Clank, and are found in Megapolis, Endako, as well as the flying lab, Aranos. Though the standard model is extremely similar to Gadge-Bots, they have three specialized models, in the form of the Hammer Bot, Bridge Bot, and Lifter Bot.

Clank uses the Microbots on two occasions, both to help Ratchet escape capture. Clank first encountered them during "Free Ratchet" on Endako. After Ratchet rescued Clank from Angela Cross, she pushed him inside the room where Clank was being held. Once Ratchet repaired Clank with the Electrolyzer, Clank found no means of escape from the room aside from an air duct that only he could fit through,[1] shortly after which he found the Microbots. He freed them from their glass cages and took command of the standard model, the Bridge Bot, and the Lifter Bot.

Next, Clank encountered Microbots in "Free Ratchet from prison cell", when escaping from the Thugs-4-Less' prison on Aranos. After scanning their prison cell, Clank found no escape, until Clank's admirer created one from another ventilation shaft. Clank crawled through the shaft systems and used more Microbots, this time in the form of the Hammer Bot, Bridge Bot, and standard model, allowing him to deactivate the power generator and provide an exit for Ratchet.[2] Following this, Clank used the Microbots again in the following mission "Meet up in the hangar bay", in which the Microbots provided his route back.

Microbots are visually identical to Gadge-Bots, being small, bipedal robots that are normally found in groups. They have a large, round heads with sharp teeth, two glowing eyes, and three antenna, two on the sides of their head and one on top. The color that their eyes and antenna glow depends on the last command given by Clank; when commanded to follow him they glow green, when commanded to wait they glow yellow, when commanded to attack they glow red, and when commanded to enter a machine they glow blue.

The new types are much larger than both Clank and the standard Microbots, and each specializes in a specific ability. The Hammer Bot is tall and has a thick torso and a pair of arms with which it grips a large double-sided hammer. It does not have legs, as only a single stalk extends from the torso, which ends in a ball it uses to move around. The stalk has a joint which allows it to jump for greater power when smashing objects.

The Lifter Bot is almost entirely the top half of a torso, despite still being as large as the other bots, with only a single ball on the bottom end. Two arms with wide shoulders allow it to lift blocks. The Bridge Bot has a long rectangle shaped body, with three tiny thrusters on the bottom end that it uses to move around. It has two arms and a head extending from the front of its body, rather than the top, allowing it to connect two platforms without crushing itself. 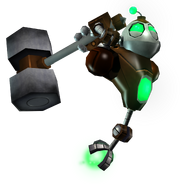 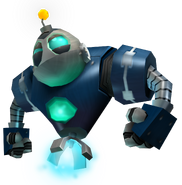 A Bridge Bot
Add a photo to this gallery

All Microbots are initially found in glass cases, effectively powered down. They can be freed by breaking the glass, at which point Clank can command them by holding

and selecting between one of four commands: Follow, Attack, Enter, or Wait. Microbots will be in Follow by default, and setting them to Wait will keep them stationary until given another command. Commanding them to Attack will send them to attack a nearby enemy, useful against larger threats that Clank cannot defeat. Enter will tell them to enter a nearby bot-port, consuming the Microbots and often opening a door for Clank to use. All Microbots are killed after a single hit, but will respawn instantly, and can deal great damage to enemies particularly when overwhelming them with numbers.

The specialized types each also have a unique command, but they all can also salute if ordered to do so, which has no practical purpose. The Lifter Bot can lift large blocks, allowing Clank and other Microbots to pass through, said ability is only used once in the entire game however. The Bridge Bot is used more often, allowing Clank and other Microbots to make it across large gaps, and deactivating its ability also lets it collapse itself on the other side. Lastly the Hammer Bot, which can smash large breakable objects, or seesaws to launch something or someone on the other end into the air. Despite their offensive power, they cannot attack enemies.

Clank's gameplay segments were a long-running headache at Insomniac Games in terms of figuring out what the gameplay should be. For the gameplay designers, it was frustrating to keep the level design fresh, and a result was that the Microbots in Going Commado would simply be given more buttons in the form of the three specialized robots. This was initially difficult for the playtesters to understand. The playtesters at first thought the Bridge Bot was supposed to be finished after it was used and did not know it was meant to be reused; as a result, the Bridge Bot was made to automatically retract after crossing it. Additionally, the Build Bridge command would be unhighlighted if there was nowhere to build a bridge.[3]

The Lifter Bot was only used once in the entire game, but there were two plans that would have seen it used twice. Firstly, in the final portion of the Microbot section on Endako, a small chasm would've appeared in which the Lifter Bot had to lift up a block for the Bridge Bot to connect to it, though this was removed and replaced with a standard bridge segment as playtesters could not understand it. Secondly, there were plans to feature a Microbots section with Clank on Yeedil, the final level, which would have reused the Lifter Bot. This section was cut because of time constraints.[3]

The salute command that the Microbots had received positive feedback from playtesters, despite serving no practical purpose.[4]

Technology in the Ratchet & Clank series
Megacorp
Retrieved from "https://ratchetandclank.fandom.com/wiki/Microbots?oldid=339582"
Community content is available under CC-BY-SA unless otherwise noted.