They must have blasted you good, soldier! You're on planet Metalis in the middle of Robot War III.

Metalis was a junkyard planet in the Solana Galaxy. Old robots who had been abandoned here competed in the Robot Wars, a destruction derby in which old robots fought each other in armed vehicles. There was also a sport called the Gadgebot Toss, a mind-challenging gadgebot survival game. Clank was dumped here by Luna after she kidnapped Ratchet and extracted his DNA. Clank had to fight in the Robot War III battle in order to get off the planet and to save his buddy. Later, you can come back as Ratchet after escaping Medical Outpost Omega. After obtaining the Polarizer, there is a secret area that you can open a gate leading to a Titanium bolt and a bunch of crates with normal bolts. You can return to the arena whenever you want to get some extra bolts.

Years ago, Metalis became the dumping ground for garbage and scrap metal for the Solana Galaxy, with fleets of ships dumping waste onto the planets many junkyards (at least 64 Junkyards exist), such as Junkyard LXIV.

Following the defeat of Tyhrranoids by Ratchet, Clank, the Q-Force and Galactic Rangers, remnants of Korgon Base were removed from Tyhrranosis and sent to Junkyard LXIV for processing. It later became a sport stadium for decaying Robots.

After Luna had betrayed Ratchet and Clank, she dumped Clank on Junkyard LXIV to rot and decay, right in the midst of Robot War III that was occurring on the planet at that moment between several robot factions. Through sheer cunning and it a bit advice from the Robot Head, Clank survived. Later, Skrunch would find Clank, giving a newspaper on Qwark's parents and video of Ratchet being experimented on by Doctor Bots at the Medical Outpost Omega. Clank later find an Ultra-Mech Pad in order to transform into Giant Clank, so that he could fly to the space station.

Clank on planet Metalis.
Add a photo to this gallery

The planet (when looked at from space) was a reused image of planet Veldin, but the image was mirrored to look slightly different.

The name "Metalis" is obviously related to the scrapyard nature of the planet. 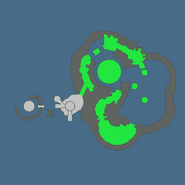 Map layout of Junkyard LXIV
Add a photo to this gallery
Retrieved from "https://ratchetandclank.fandom.com/wiki/Metalis?oldid=332714"
Community content is available under CC-BY-SA unless otherwise noted.