Megacorp Laser Bots have a tubular shape, apparently moving with wheels on the bottom, with the two lasers placed half way up their body on a component which spins to move the lasers. At the top is an orange light encased in glass, along with an apparent monitor and two antenna mounted on the sides. Laser Bots are often warped in after detecting a threat, or found initially patrolling an area. When arriving to an area, they will patrol it, spinning their lasers continuously to destroy stains. Unlike Megacorp Sweeper Bots and Megacorp Rivet Bots, they are not actively hostile to Ratchet; however, their erratic movement, laser range and spinning speed makes it difficult to ignore them. When Clank arrives with the microbots, their lasers will actively target Clank, but only reach a certain distance as they will stay still, only targeting Clank and his microbots in a fixed range.

Megacorp Laser Bots are relatively durable, and their lasers can deal considerable damage if not avoided. The best strategy is to use a ranged weapon such as the Chopper or Blitz Gun, and to simply stay away from them entirely. The Miniturret Glove is also viable when they spawn along with Sweeper Bots. When controlling the crane during "Rescue Clank from the thief", it is possible to pick them up with the crane and drop them to destroy them instantly, or to pick them up and use their laser on other enemies. As Clank, the best option is to stand close to them, but away from the laser, and command the microbots to destroy them. 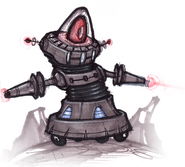