Medical Station XL6, more commonly known as the Medical Outpost Omega, was a space station run by the Technomites that was used for medical research.

After falling for Luna's trap, Ratchet was taken to the medical facility, where the Doctor Bots, acting under Emperor Otto Destruct's orders, operated Ratchet. The facility was used to extract, study and replicate Ratchet's DNA. Once created, the Ratchet clones were tested in this facility, as seen during Luna's transmission to Emperor Otto. After Ratchet woke up from his nightmarish dream, he fought his way through the medical facility until he found the DNA replication laboratory. Realising what had happened to him, he threw one of the DNA vials against the outpost's core, making it unstable. Ratchet was then forced to escape before he could figure out more of what was happening. He managed to get to his ship and escape with Clank seconds before the Medical Outpost Omega exploded.

The remnants of and debris left from the station were still usable for Skyboarding. The bed where Ratchet was operated miraculously survived without a scratch, allowing Ratchet to revisit Dreamtime whenever he wished. 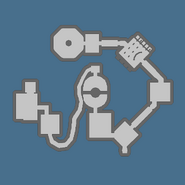 Map layout of Medical Outpost Omega
Add a photo to this gallery
Retrieved from "https://ratchetandclank.fandom.com/wiki/Medical_Outpost_Omega?oldid=333444"
Community content is available under CC-BY-SA unless otherwise noted.