Turret
For the area in the single player, see Marcadia § Presidential compound.

Marcadia Palace is a map in the multiplayer mode in Up Your Arsenal. It is based on the palace featured in the Galactic Rangers' Operation: IRON SHIELD on Marcadia. It is a relatively small terrain, with a mirrored design, taking place during nighttime. The main doorway into the palace is the location of a single Minirocket Tube crate, with the doorway featuring a series of arches that connect to half-elliptical-shaped walls, each of which span to the left and right, and shield a small patch of trees, in the center of which sits a Lava Gun crate.

Behind the walls are pairs of Charge Boots, with other weapons being located around the edge of the map, identical on both sides, including a nanotech crate. The moat seen in the Galactic Rangers mission is now empty, allowing access to Mine Gloves, Flux Rifles, a Holoshield Glove, and a jump pad that lets players reach the turret emplacement on the pillar facing the main doorway (although this can also be climbed normally, using a ledge grab to pull yourself up). 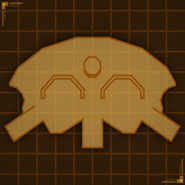 Map of Marcadia Palace.
Add a photo to this gallery
Locations in the Solana Galaxy in Up Your Arsenal
Retrieved from "https://ratchetandclank.fandom.com/wiki/Marcadia_Palace?oldid=337497"
Community content is available under CC-BY-SA unless otherwise noted.