Kalidon was a planet long colonized by Technomites, residing on the edges of the Solana Galaxy.[1] The planet was used by the Technomites to be the site of the Mechanoid Factory, the source to a variety of the R.C.U.s. The planet's very thin atmosphere and low gravity allowed small asteroids to float above the surface, explaining the planet's cratered landscape. It is also home to the Casino Guards from Secret Agent Clank.

While Kalidon was virtually unknown to non-Technomites, some Skyboarders had managed to discover the planet, often using the emptier areas of the planet to practice Skyboarding races. During Emperor Otto Destruct's scheme to create an army of Ratchet Clones, Ratchet and Clank were tricked into going to Kalidon, thinking they were rescuing a little girl named Luna, but in truth they were doing little else than walking into Emperor Otto's clutches. Once inside the factory, Ratchet and Clank battled a ferocious creature named Mungo, put there to "guard" Luna. Once they defeated Mungo, Luna zapped Clank unconscious and had several Technomite robot soldiers ambush Ratchet, to be taken to the Medical Outpost Omega space station. During their time on Kalidon, Ratchet and Clank also participated in a Skyboarding race. They won and received a Shrink Ray and the Grind boots as a reward. 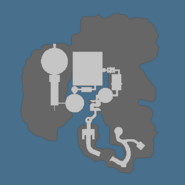 Map layout of the Mechanoid Factory

Ratchet on planet Kalidon
Add a photo to this gallery

Retrieved from "https://ratchetandclank.fandom.com/wiki/Kalidon?oldid=330351"
Community content is available under CC-BY-SA unless otherwise noted.