Ratchet and Clank arrived in search of the Hologuise, a gadget that would allow them to sneak by sentry-bots. However, Chairman Drek sent his most elite troops to hunt them down and attack the site. In the 2016 re-imagined release, Kalebo III has a near-identical role in level design and the narrative, but does not appear in the movie.

Ratchet and Clank received coordinates for Kalebo III on planet Quartu, from an infobot given to them by the Ultra-Mech Scientist, after "Destroy the Ultra-Mechs". The infobot contained a commercial for the Hologuise, which would allow them to infiltrate Quartu's factory by sneaking past the sentry-bots. When they traveled to their destination, Drek sent his most elite troops to attack the planet in search of them, telling them that he would be happy for them to destroy Gadgetron if it meant getting rid of them.[1]

On arrival, the Gadgetron site was under attack by the blarg in search of Ratchet and Clank. In "Get past the blarg", Ratchet and Clank fought through the blarg, along with hostile test dummy robots, to reach Wendell Lumos, the Gadgetron CEO. Lumos seemed aloof and unconcerned with the invasion, believing Gadgetron had nothing to fear due to their strong defenses.[2] After they asked him about the Hologuise, he said that the device was unavailable, but could still be won as a prize for the hoverboard race against Gadgetron's test dummies. Ratchet and Clank won the hoverboard race, and the CEO asked them to film a commercial endorsing Gadgetron's latest hoverboard, to which they obliged. He also told them that they could receive an employee discount if they stayed with Gadgetron for two years.[3]

In "Ride the Grind Rail", the two traversed the trains and reached the HelpDesk Girl. After Clank flirted with her, she gave them a Map-o-Matic.

Please see Project:Bulletin board/Canon for the wiki's coverage of canon.

In Qwark's version of events, Kalebo III played a largely identical role. After the destruction of Novalis, Elaris gave Ratchet and Clank coordinates to the planet to search for a Hologuise, as it was crucial to her plan to infiltrate the Deplanetizer by disguising Ratchet as Qwark. Upon arrival, the planet was under attack by the blarg, and the island on which the Gadgetron Headquarters was located was flooded after the blarg destroyed a dam.

In "Find the Focus Lab", Ratchet and Clank fought through the blarg forces to defend the planet and reach the Gadgetron CEO, Wendell Lumos. Along the way, several blarg had hijacked the Weapon Testing Labs, sending the test dummies to attack Ratchet, though the third lab only contained sheep. After reaching Wendell Lumos, he thanked them for defending the planet, but lamented that the Hologuise had sold out. Instead, he suggested they win the hoverboard race, as it was given away as a prize for first place. Ratchet used his Hydrodisplacer to drain the water, making the hoverboard races accessible again.

In "Ride the grindrail", Ratchet and Clank found a grind rail leading to a room containing the Map-o-Matic.

Starting from the landing site is a long walkway featuring moving floors, which leads towards the headquarters. The path comes to a stop, but the gap is cleared by another moving, holographic floor. The path continues into the circular lobby, featuring many plants lined against the outer walls and a Gadgetron vendor in the dead center. The lobby is situated within a tall, cylinder-shaped building within the headquarters, featuring the iconic Gadgetron logo slowly rotating around the top (only appearing in the original game).

The path into the headquarters follows right of the lobby. The building features several testing rooms for its dummies, its floors damaged from recent weapon use. The building stretches very far from one end to the other, and is rich in advanced architecture, featuring many large columns and glass windows, its roof mainly cylinder-shaped.

The hoverboard track is much like the one in Blackwater City, but with the differences being that this features two shortcuts and ammunition for Ratchet's Devastator. Racers are introduced to a short, right turn that leads them down a most straight route, featuring a large ramp that will send one through a large stack of crates on a platform suspended high above the track. Continuing forward, this portion of the route ends with a ramp placed after a row of explosive crates, that will allow one to cross the gap to the remainder of the route, or access a side route that circles around a building, stopping when it reaches above the normal route, forcing one to make a careful leap to the tunnel across, which holds a gold bolt.

Along the normal route, racers are given a choice of a top route or a bottom route, with the top one featuring several boost pads. On the bottom, placed between every other pillar supporting the upper path are three large stacks of crates ripe for breaking. Upon approaching a left turn, players are met with two side ramps and a series of blue crates and explosive crates. Attached to the side of the track are yellow ramp-like structures that can be driven off of. Near the end of this route, past two large stacks of blue crates and a boost pad is a ramp that sends racers down to a lower portion of the track, featuring a structure that splits the path in two, the left path seeing a couple of jumps and the right one featuring a small ramp. What remains is a right turn past some arches that can be driven through to activate them, thereby unlocking the nearby shortcut on the right. At this point, the route returns to the starting point.

The grind rail system is highly expansive, featuring many turns and loops, a few tricky gaps, and buttons that need to be activated to clear forcefields along the rails. Many train cars are seen traversing the track, always going in just one direction. Also appearing along the rails are mines, sometimes individually or in groups of two or three. The rails pass by and through several towering structures, each having a small barrier that must be jumped over. The rails also pass through a few tunnels, one of which is a very long one that appears midway along the route.

The rails wrap up at the office of the HelpDesk Girl. Her office is seemingly small, featuring a semi-circular counter, along with several pots of flowers lined up against the wall behind her. Surrounding her office is a circular glass wall.

The 2016 re-imagined game is primarily an unreliable retelling of events by Qwark.
The re-imagined game primarily describes Captain Qwark's account of events. As Qwark is an unreliable narrator, and contradictory events are in-universe fiction (though those which correspond still apply). Please see Project:Bulletin board/Canon for the wiki's coverage of canon.
Section incomplete
This section is empty or needs to be expanded. You can help the Ratchet & Clank Wiki by writing it.

In the original release, despite the planet's islands being surrounded by water, the death animation used when Ratchet falls into water is the one in which he falls through air, rather than him being eaten by a sharkigator. Additionally, underneath the water, the race track for the hoverboard race is clearly visible to the player but out of reach. This is because the hoverboard race is loaded in below the main level (as is the race in Rilgar), though the developers did not obscure it from vision. This is referenced in the 2016 re-imagined game, where the race track's visibility is intentional, and the CEO, before the race, instead drains the water around it when the races begin.

In the Platinum PAL release of the original game, the Gadgetron tower instead had "Galactron" written around it. 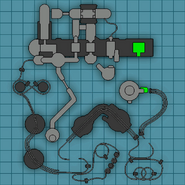 Map layout of the Gadgetron site in the 2002 game.

The Gadgetron Headquarters in the re-imagining, when flooded.