Start a Wiki
Image needed
This article or its infobox is missing one or more images. You can help the Ratchet & Clank Wiki by uploading one.

Defeat all Technomites
Escape from Clank

Not the Shock of Me Now
Ratchet... Just Ratchet
Inside Clank is a location in Size Matters. It comprises several areas in Clank's internals, which are patrolled by anti-virus nanobots, and that Ratchet explores using the Shrink Ray, after he was attacked by the technomites.

After Clank interfaced with Luna on Dayni Moon to obtain the coordinates to Quodrona, he was subsequently electrocuted by Luna's level nine access protocol,[1] deactivating his power, and attacked by several technomites inside Luna. Clank's security backup came online to protect his circuitry, as was protocol when Clank's power outed.[2] Ratchet himself entered in order to rescue him, and met with Clank's security backup, who told him he would use the auxiliary switch to turn Clank's power on after Ratchet eliminated the technomites. This commenced "Defeat all Technomites",

Ratchet defeated them, and returned to Clank's security backup, who pulled the switch. He was then warned that Clank's automatic virus detection program would hunt him down if he did not leave.[3] In "Escape from Clank", Ratchet avoided all the hazards and anti-virus nanobots, and returned to the outside, where Clank had successfully obtained the coordinates to the Clone Factory on Quodrona.

If Ratchet wanted to he could re-enter Clank's body by interacting with the robotic remains of Luna after her defeat in ""Disable" Luna". 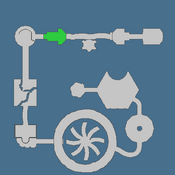 The map for the chest area. 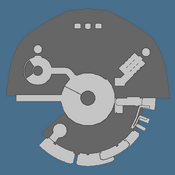 The map for the head area.

The two portions Ratchet visits inside Clank are the chest, seen in "Defeat all Technomites", and the head, in "Escape from Clank". Both areas are visually very different.

Throughout the chest, Ratchet visits darker compartments with huge cogs on the side of most walls. In some cases, the walls instead have wires behind glass walls, in other cases there are moving cooling fans, and others still have components of motherboards. Some of the rooms have blue capsules exuding from the floors. In between the chambers are small hallways, with thick wires that serve as the floor and walls.

Ratchet arrives in a wide chamber, with cog walls, and some wires dangling from the ceiling. Past this is a room with a tube in the center, adjacent to another with several capsules either side, each of which is infested with technomites when Ratchet arrives. Connecting to this is a room with a blue floor, within which are cracks where an electric current runs through, and this then leads to a tall room with an elevator leading up to the top to a hallway into a round chamber with a large fan.

Clank's heart is located through a hallway atop the chamber with a large fan.[4] It is a metal semi-spherical object with huge red tubes leading to it, surrounded by a metal shell. The technomites removed pieces of the metal shell, to reveal the red energy inside, that releases bursts of energy between intervals. From here, an elevator is used to reach Clank's head.

The chambers around the head are much brighter, and replacing the cogs in the distance are bright energy glows. A few bridges and some floating platforms are used to cross the much wider chambers.

Ratchet enters a bridge inside a chamber where Clank's outer metal skin is seen on the distant edge, while along the bridge are fans and electric hazards, and several grav-ramps to navigate this chamber. This leads into two chambers surrounded by green walls with motherboard patterns, the first of which has a pit of green energy, while the second is a smaller chamber with some black motherboard pieces.

The path leads into a wider chamber behind Clank's eyes, where Clank's green corneas can be seen on the righthand side, and Clank's blue pupils in the walls on the left. At the end of this is a lighter, blue room around a glass tube in the center with a wire running through it. A hallway at the end leads to another chamber, this time surrounding a spherical object in the center held up by wires, which is presumably Clank's brain. Bridges on the outside lead to a hole that Ratchet uses to exit through Clank's mouth.

Locations in the Solana Galaxy in Size Matters
Retrieved from "https://ratchetandclank.fandom.com/wiki/Inside_Clank?oldid=342643"
Community content is available under CC-BY-SA unless otherwise noted.