"Locate the gadget inside the McMarx Sports Shack", Outpost X11, Aridia
The Hydrodisplacer is a gadget in Ratchet & Clank. It is a handheld gadget developed by Gadgetron Corporation that drains and fills pools of water when attached to a plug point, therefore "displacing" it. It makes use of quantum compression technology, allowing it to hold up to 50,000 liters of water.[1]

In the original Ratchet & Clank, it can be found by Clank while journeying outside of the airlock in the Blarg Tactical Research Station in Nebula G34. In the 2016 re-imagined Ratchet & Clank, it is found on Aridia instead, after traversing an area with the Swingshot inside Skidd's Sports Shack. 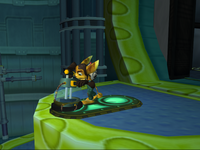 The Hydrodisplacer while draining (top) and filling (bottom) a pool.

Ratchet first used the Hydrodisplacer in Blackwater City, planet Rilgar, during the mission "Locate Captain Qwark", while traversing part of the city's sewers. He also used it during Captain Qwark's training course in the mission "Survive Qwark's gauntlet", while traversing Qwark's headquarters on Umbris. Later, he used it at Jowai Resort on Pokitaru, while navigating the sewers. It was also used in "Explore the Icy Wastes" on Hoven to flood a large cavern, and finally once more in the Kyzil Plateau, planet Veldin, in the midst of the mission "Save Ratchet's planet".

In Qwark's version of events, the hydrodisplacer was used on many planets and locations throughout the game. When Ratchet acquired the hydrodisplacer from Skidd McMarx Sports Shack on Aridia, he used it to clear a medium amount of water during the mission "Locate the gadget inside the McMarx Sports Shack". Like the original game, he also used the device while traversing the sewers of Blackwater City on Rilgar, during the mission "Search the sewers". Later, he used the device in the blarg pumping station on Pokitaru, during the mission "Clean up Amoeboids in Pumping Station", to drain amounts of water inside the pumping station. It was finally used in Wendell Lumos' office on Kalebo III after completing the mission "Find the Focus Lab"; he used it to drain all the water that flooded the hoverboard track.

The Hydrodisplacer can drain and fill pools of water by interacting with water plug points, allowing Ratchet to clear or fill a pool depending on which is required to progress. Hydro-Faucets are used to fill the Hydrodisplacer, and filling it will automatically convert them to a Hydro-Drain, where the Hydrodisplacer's water can be deposited.

The volume of water that can be contained within a Hydrodisplacer is 50,000 liters, far greater than the gadget's external volume may have indicated, and uses quantum compression technology to manipulate water particles and place them into a compression tank.[1]

The Hydrodisplacer in the beta version of the game, with a vastly different appearance than the final version.

A Hydro Faucet from the reimagining.