"Fight the Blarg", Blarg Research Outpost, Gaspar
Grind Boots, occasionally known as Grindboots, are a recurring gadget in the Ratchet & Clank series, which have appeared in most entries. They are boots that allow Ratchet and Rivet to grind and move on grindrails, poles, train lines, telephone poles, among other specific locations. Ratchet can also hop between adjacent rails. They feature a red design developed by the blarg, though Vox Industries developed their own.[citation needed] Ratchet can sometimes use the OmniWrench to destroy obstacles and enemies along the path. In All 4 One, larger grind tubes are used in place of grind rails, to allow four players to grind at once. These are otherwise functionally identical.

The Grindboots make their debut in Ratchet & Clank, purchased on Blarg Tactical Research Station in Nebula G34 from Fred, an engineer. Available in the mission "Buy Grindboots", which came immediately after "Explore the space station", they cost 2,000 bolts, which included the employee discount. During this time, the existence of the Grind Boots was rumored, but Gadgetron did not believe such a device existed.[1]

Ratchet later used the Grindboots outside of Fort Krontos, on planet Batalia, while scouting the area, during which he found a grind rail and rode it in the mission "Ride the grind rail". The grind rails present here were notably littered with numerous explosive mines. Ratchet did not use them again until planet Oltanis, where he made his way through the Gorda City Ruins to find any survivors of the blarg attack. Plasmabots appeared to also be capable of riding the grind rails present in the city, but failed to stop Ratchet from making his way through.

Ratchet also rode a grind rail on Kalebo III, during which he had to deal with a large amount of bolt thieves and their planted mines. Finally, he used the grindboots for a short section on the Kyzil Plateau, Veldin, while making his way through the blarg forces during the mission "Save Ratchet's planet".

In Qwark's retelling of events, the Grind Boots were instead a project developed by Dr. Nefarious. They are obtained for free in "Fight the Blarg" after infiltrating his Blarg Depot facility on planet Gaspar. These would help Ratchet and Clank during the "Find the Jetpack" mission.

They would be used on planet Batalia during the "Ride the rail" mission in order to acquire an infobot with a transmission from Grimroth Razz about his brother Felton Razz being in danger on Pokitaru.

Ratchet would use theses on Kalebo III during the "Ride the grindrail" mission which led the duo to a room containing the Map-o-Matic.

They would be used briefly during a grind rail section in the "Defeat Dr. Nefarious" mission.

Ratchet obtained the Grind Boots along with the Swingshot in "Visit Clank's apartment", in which he visited Clank's apartment on Endako to see if he had left any useful behind.[2] He used them on Endako on the same path he had just visited in order to reach Slim Cognito's weapon mod vendor.

Ratchet used the Grind Boots in the Silver City, Boldan, in "Ride the power lines", in which he used the Grind Boots to traverse the power lines looking for a shortcut to travel around the city.[3] They were also used briefly in "Rescue Angela" on Snivelak while traversing the outer buildings before reaching the bridge. Later, he used them in Allgon City, Damosel, in "Ride the train rails", once again believing they may provide a shortcut.[4] Lastly they were used twice to collect platinum bolts on Yeedil's Protopet Factory.

Ratchet wore Grind Boots produced by Vox Industries for a handful of battlecourses. They were used extensively during the challenges on Kronos, in conjunction with the Grind Cable gadget used by the combat bots. The Grind Boots were also used on the Valix Belt, the planets Stygia and Maraxus, the Ghost Station, and both Dread Challenges in the Vindicator Tournament. New to the series was Ratchet being able to use a ranged weapon, specifically the Dual Vipers, while on the grind rail.

After "Win the skyboard race" on Kalidon, the Skyboarder threw a pair of Grindboots for free along with the Shrink Ray. These were used in tandem with the Shrink Ray to open magnetic locks, known as Grind Locks, on many occasions throughout Ratchet's adventure.

In other entries, the Grind Boots are immediately available for Ratchet (and Rivet in Rift Apart) at no cost, and they retain their Gadgetron design.

Promotional poster of Ratchet on a grindrail. 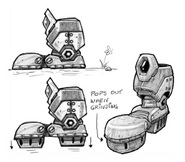