The Gravity Bomb is a weapon manufactured by Megacorp in Going Commando and Going Mobile. It also appears in Up Your Arsenal's multiplayer mode. It is a medium-range grenade launcher which launches powerful bombs with a high blast radius. Though it is a powerful weapon, even more so when it is upgraded to the Mini-Nuke, its ammunition is limited.

The Gravity Bomb was available as one of two default Megacorp Commando weapons, along with the Lancer. It could be upgraded to the Mini-Nuke with use, which launches low-powered nuclear explosives which set off a mushroom cloud explosion. In challenge mode, it could later be upgraded to the Mega Mini-Nuke from any Megacorp vendor for 1,500,000 bolts.

The Gravity Bomb is featured as a pick-up in multiplayer, and can again upgrade to the Mini-Nuke after killing other players. It had a faster rate of fire with a slightly different explosion.

Going Mobile is non-canon.
As Going Mobile was never installed as part of the main series, its events are considered non-canon. Please see Project:Bulletin board/Canon for the wiki's coverage of canon.

The Gravity Bomb is available at the start for 250 bolts in the Series 40 version at the Weapon Store. In the Series 60 version it is instead available only after completion of the first Circuit Circuit level, and costs 800 bolts. It can be upgraded to V3 with use.

Both the Gravity Bomb and Mini-Nuke are long, blue grenade launchers with cooling vents and glowing yellow generator at the back, and two flaps (four as Mini-Nuke) at the end of the nozzle. The generator features tubes leading from it to the launcher of the weapon. Both feature a left-hand grip at the bottom.

The bombs launched have a one-eyed smiling face, and set off a large explosion. As the Mini-Nuke, the explosion set off by the bomb has a mushroom cloud.

In Going Mobile it looks different, sporting a yellow-green color.

The Gravity Bomb is slow to fire and deliver its payload, but when it does it does so with impressive force. Incredibly useful against either powerful or grouped enemies, it can easily take out entire swaths of targets with a single blow. Its upgrade, the Mini-Nuke, increases the damage radius and damage dealt. The weapon holds little efficient use against lone or weak enemies, as its limited ammo count and pick-up rate from ammo crates means it is unlikely it can keep up if used in this manner.

As it is a starting weapon, it is inevitably less useful as the game progresses, however the final Mega upgrade is even useful throughout challenge mode, albeit at a hefty cost of 1,500,000 bolts.

The Gravity Bomb also has two optional weapon modifications: the Acid Mod and the Lock On Mod. The former further improves its already impressive damage by adding a damage over time, while the latter provides little effective use due to its already impressive area of effect. The Acid Mod is a solid modification, as it will apply the effect to all enemies hit in the large blast radius.

As the Gravity Bomb is acquired so early, it is inevitably less useful as the game progresses, however its ability to damage enemies on lower platforms can still be useful in later levels, especially against large groups of dangerous explodos. 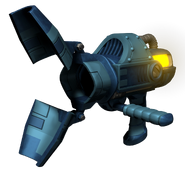