Commanded robot
Gadgebots[1][2], occasionally spelled Gadge-Bots[3], are small robots manufactured by Gadgetron in Ratchet & Clank, the 2016 re-imagined game, Up Your Arsenal, Size Matters, and Secret Agent Clank. They are small robots which Clank can command, found throughout the Solana Galaxy, are capable of powering certain machines by entering them, or attacking enemies.

In Going Commando, the very similar Microbots appear, created by Megacorp. Clank later commanded the Zoni in Tools of Destruction, which served a similar function to gadgebots. 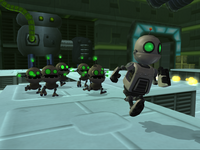 Clank issuing the follow command to a group of gadgebots. 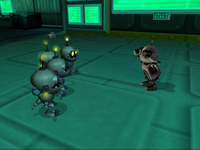 Clank issuing the wait command to a group of gadgebots.

Clank first found gadgebots in the Blarg Tactical Research Station, Nebula G34, during "Journey outside the airlock". He commanded gadgebots to explore the outer parts of the station, and eventually acquired a Hydrodisplacer.

Later, Clank found more gadgebots while exploring the Kogor Refinery on the abandoned blarg homeworld of Orxon, before Ratchet possessed the O2 Mask. Clank commanded gadgebots first during "Search the laboratories" in which he found the Magneboots for Ratchet, and later when exploring further beyond them in "Traverse the wilderness", in which they helped him find an infobot for Pokitaru. In the latter mission, Clank commanded twelve gadgebots, the highest amount he ever had under his control since.

In Qwark's retelling of events, gadgebots appeared more often and had a different function. Clank first found two gadgebot types, the springbot and powerbot, during "Escape the factory", in which he used them to escape Victor Von Ion while fleeing the warbot factory after being created on Quartu.

Clank later found gadgebots again outside the Blarg Tactical Research Station, Nebula G34, during "Journey outside the airlock". He obtained a gadgebot upgrade chip which allowed him to pick up a gadgebot and reprogram it into one of three types: springbot, powerbot, or a new type, bridgebot. He used the gadgebots to find a pair of Magneboots located outside the station.

Clank used gadgebots twice more. When returning to Skorg City, Quartu, Clank used the gadgebots during "Disable the security lasers", in which he used them to bypass Zed's traps inside the factory and disable lasers preventing the Galactic Rangers from entering. Later, on-board the Phoenix, Clank used gadgebots to repair the ship's fire suppression system when Victor Von Ion attacked it during "Defeat Victor Von Ion", allowing him to finally defeat Victor.

Clank first used gadgebots during "Find Nefarious' Office" on Aquatos. After Ratchet raised the bridge from below, Clank acquired a group of gadgebots. Clank commanded the gadgebots, which allowed him to destroy a bladed spinning top in his and Skrunch's path, and enter a port allowing him to pass through a forcefield.

Later, gadgebots appeared during "Film a Secret Agent Clank Episode", on Holostar Studios. Clank commanded gadgebots while filming "Maxmillian Strikes Back", an episode of Secret Agent Clank featuring Courtney Gears, in order to gain more information from her. Once again, the gadgebots were used to enter a port and allow Clank to proceed forward, though Clank had to use Skrunch to create a bridge across for them.

Clank's first encounter with gadgebots in Size Matters is in a technomite temple in the Vetega Jungle on the planet Ryllus, during the mission "Unlock the temple". Here, the gadgebots helped him unlock the temple and allow Ratchet inside. Several immobile BotFlingers assisted him in moving the gadgebots around the temple.

Later, gadgebots appeared in several Clank Challenges, first in Junkyard LXIV on Metalis, and later in the Farming Cooperative on Dayni Moon. Gadgebots were used in the challenge types Gadgebot Toss, in which a mobile BotFlinger was used by contestants to toss gadgebots into a goalpost and score points, and also in Gadgebot Survival, in which Clank gave commands to gadgebots across a 2D plane to direct them to a house (a bot port) and complete the challenge.

Gadgebots are small, bipedal robots that are normally found in groups. In most releases, they have large, round heads with sharp teeth, two glowing eyes, and three antennae, two on the sides of their head and one on top. The color that their eyes and antenna glow depends on the last command given by Clank; when commanded to follow him they glow green, when commanded to wait they glow yellow, when commanded to attack they glow red, and when commanded to enter a machine they glow blue. These gadgebots have a similar design to Agents of Doom.

In Secret Agent Clank, the Agency's gadgebots have body paint resembling a tuxedo, and wear a headset.

In the re-imagined release, gadgebots have a slightly different appearance, with no torso, two small arms, a single antenna, and smaller toothless mouths, and in their default position, their eyes always glow green. Different gadgebot forms have different appearances; powerbots are blue with longer torsos and two large antennae, springbots are orange with a large spring on top of their head, and bridgebots are yellow with wide and long torsos. 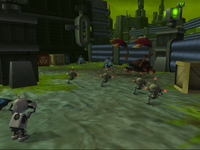 Clank issuing the attack command to a group of gadgebots. 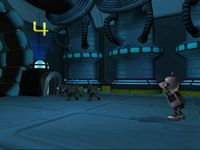 Clank issuing the enter command to a group of gadgebots.

In the original Ratchet & Clank and Size Matters, gadgebots are initially found in glass cases, effectively powered down, and can be freed by breaking the glass. In Up Your Arsenal they are either found waiting or generated from small devices on the ground. Once freed or obtained, Clank can command them by holding

and selecting between one of four commands: Follow, Attack, Enter, or Wait. Gadgebots will be in Follow by default, and setting them to Wait will keep them stationary until given another command. Commanding them to Attack will send them to attack a nearby enemy, useful against larger threats that Clank cannot defeat. Enter will tell them to enter a nearby machine, consuming the gadgebots and often opening a door for Clank to use. Gadgebots are killed after a single hit, but will respawn instantly, and can deal great damage to enemies particularly when overwhelming them with numbers.

In the re-imagined release, Clank uses gadgebots differently. Gadgebots are picked up and thrown by pressing

, and while picked up, Clank can reprogram a gadgebot into one of three forms either by holding

for bridgebot. Clank can then throw them to power an adjacent machine, create a spring to bounce from and jump higher, or create a bridge across certain gaps.

Springbot in the re-imagined game. 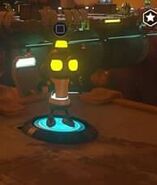 Bridgebot in the re-imagined game.

Powerbot in the re-imagined game.
Add a photo to this gallery

Technology in the Ratchet & Clank series
Gadgetron Corporation
Retrieved from "https://ratchetandclank.fandom.com/wiki/Gadgebots?oldid=347644"
Community content is available under CC-BY-SA unless otherwise noted.