View source
Expansion required
This article is too short to provide more than rudimentary information about the subject. You can help the Ratchet & Clank Wiki by expanding it.
Better image needed
An image on this page has quality issues that need to be rectified. Please help the Ratchet & Clank Wiki by editing or replacing it with a better version.

Dropships are a type of commonly recurring vehicle in the Ratchet & Clank series. They are used to transport soldiers and 'drop' them in the midst of battle against Ratchet and Clank. Some of them also had offensive capabilities, in which case they were often also deployed as gunships. All of them sported thick armor, to shield themselves as they would be vulnerable when dropping off units. All dropships could be destroyed, which could lessen the enemies' combat capabilities significantly due to the lack of reinforcements.

In Ratchet & Clank, the blarg possessed several powerful dropships, called armed transports, which were solely used to move their most elite commandos. They first appeared during the blarg attack on the Gadgetron site on Kalebo III, and later in very high number during the blarg offensive on Kyzil Plateau on Veldin. They had substantial armor, and a both powerful and accurate missile launcher. 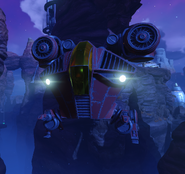 In Going Commando, Thugs-4-Less used dropships first during "Win the Arena Battle", as dropships on the Maktar Resort transported Thugs-4-Less Brutes on Ratchet's way to the Galactic Gladiators battle. Next, dropships were used by Angela Cross to transport both the flamethrower model and the chainsaw model Megacorp Security Robots on Siberius during "Find and confront the thief", warping them in to stop Ratchet from confronting her.

A Thugs-4-Less dropship also transported Ratchet and Clank to the Thugs-4-Less Prison after being captured at the end of "Find Mr. Fizzwidget", showing they are capable of space travel. Finally, dropships transported the Extermibots on Damosel to combat the Protopet crisis in Allgon City during "Save the overrun planet".

A dropship used to transport Extermibots.

In Up Your Arsenal, dropships were commonly used by the tyhrranoids, with their tyhrranoid dropship being a constant sight in the skies during any of their invasions, as well as several locations in league with Dr. Nefarious. They are only used to transport three-eyed tyhrranoids and ultra mecha-tyhrranoids, dropping off on average three of the former and two of the latter, although numbers of up to four are possible. They were also encountered in direct combat a few times, primarily in the hovership or a turret.

The Galactic Rangers also possessed their own dropship that they used to move Rangers, and Ratchet and Clank, between battlefields. It is normally parked in the hangar bay in the Starship Phoenix, but deployed on several locations where Ranger operations took place, such as Marcadia, Tyhrranosis, Rilgar, Kerwan, and Aridia. It was also seen twice on Veldin and once on Mylon, and in all instances but Marcadia, Ratchet and the Rangers were forced to perform a HALO jump, as the ship lacked the proper defenses to deal with the tyhrranoids' anti-air installations. It also has a vendor on-board for restocking on ammo and purchasing new weapons.

Nefarious also used yellow dropships called troop transports at his Nefarious BFG area on Koros, encountered during "Get inside command center" and "Access big gun control panel". Troop transports had thrusters mounted on their back that could tilt upwards, allowing them to maintain lift, while also retaining the option to swiftly leave the area by tilting the thrusters forwards. They solely dropped off soldier bots, at a limit of four per transport. Only one is directly engaged in combat and attempted to block Ratchet and Clank from entering the local command center. Despite its size it is not particularly dangerous, having worse firing capabilities than the tyhrranoids' dropship, and is easily defeated with the Plasma Coil. 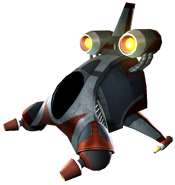 In Deadlocked, Vox Industries produced dropships for their DreadZone Holovision combat show. They frequently deployed DZ Strikers and Tri-Spike Swarmers (and variants), among other enemy types. They had the added benefit of providing additional firepower with their mounted pair of rocket launchers.

In Size Matters, the technomites made use of a single dropship to deploy and move forces. It was first seen on Pokitaru's Jowai Resort, and later on fought and destroyed during "Explore the miniature city" on planet Challax.

In Secret Agent Clank, the Kingpin's forces made use of a helicopter as a dropship on Rionosis to deploy expatriots and henchbots. Once all enemies were defated the helicotper would utilize missiles to destroy the gondola platforms.

The Imperial Army utilized Tachyon transport ships, also known as drophyd dropships[1] which to deploy drophyd forces as well as tesladrones to protect Tachyon-controlled areas in Tools of Destruction.

Their strength and armor were moderate and they attacked up to moderate range. At the beginning of the game, these ships only brought enemies, but later had the ability to shoot, although they rarely did this. They attacked with their two frontal turrets that shot red lasers. Sometimes they stayed and shot, while other times they shot then retreated. Medium or long range weapons like the Predator Launcher were good against these ships. They are not affected by the Groovitron and drop no bolts nor Raritanium on defeat.

The space pirates utilized pirate transport ships,[2] also known as barges or pirate ships, were Space Pirate transport craft, used primarily in the vein as an dropship; one also served as a private transport for Slag and Pete across Ardolis. Pirates would either drop off from the deck directly, or walk across the retractable planks; in addition to this, they also sometimes carried crates and explosive barrels. These ships were not armed, though during the space pirate invasion of Kerchu City on planet Jasindu, one vessel smashed right through the walls of Kerchu Fortress.

Ratchet and Clank would sometimes hitch a ride on these vessels to move around the environment similar to that of the taxi, often with space pirate crew of the vessel attempting to throw them overboard.

The pirate transport ships from Tools of Destrutcion made there return. In Quest for Booty the ships also acted as platforms at the space pirate fleet on the Azorean Sea.

In A Crack in Time, Agorians used Talons to deploy reinforcements to areas that they were invading.

Dr. Nefarious used new dropships to beam down his army of Nefarious Troopers when he resurfaced in the Polaris Galaxy.

In Ratchet & Clank: Full Frontal Assault, the dropships deployed by the Grungarians were only used to beam down reinforcements, not to attack Ratchet, Clank, or Qwark. If a dropship was on the move, and attack upon the Q-Force base by the marauders was imminent.

The Thugs-4-Less used new dropships during the destruction of the Nebulox Seven Prison Ship and across the Zarkov Sector until the aftermath of Ratchet's battle with Neftin Prog.

The rebranded Goons-4-Less used a new attack dropship armed with a gatling laser. The Nefarious Troopers also had their own dropship, armed with an explosive turbolux cannon and controlled primarily by hardwired drone pilot algorithms.