Vox
The DreadZone Station, also known as DreadZone Headquarters,[1] was the main hub of Gleeman Vox's empire Vox Industries and home to the Battledome. It was here where Gleeman Vox hosted his base of operations. It orbited an unnamed planet surrounded by a number of moons. This space station was enormous. Also, many lanes of traffic, like those on Kerwan, could be seen passing through and across the station. It was cylindrical in design, as evidenced by its massive fly-through hangar bay and circular rim. The station was the factory for Vox's merchandise, his media center, weapons manufacturing, and so on. Many heroes had living quarters here before the station was destroyed by Vox in an attempt to gain the biggest ratings in the galaxy. He detonated the Battledome in an attempt to kill Ratchet, his #1 contestant. However, Ratchet defeated Vox and escaped just as the station exploded. This was also the location where Nefarious had been planning to escape from the asteroid he was stranded on before the explosion. Strangely, he did not come across the nearby planets seen at the station as it blew up.

The Control Level was a main part of DreadZone Station. There were three generators: East and West Generator and the Central Core. Ratchet needed to destroy the generators in order to stop the auto destruction countdown.

Characters on the DreadZone Station 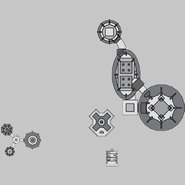 Map of the DreadZone station. 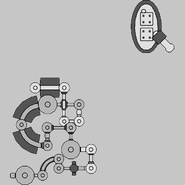 Map of the Battledome control level.
Add a photo to this gallery

Retrieved from "https://ratchetandclank.fandom.com/wiki/DreadZone_Station?oldid=336788"
Community content is available under CC-BY-SA unless otherwise noted.