The Dimensionator is a device seen in Tools of Destruction, the Ratchet & Clank comic series, Into the Nexus, and Rift Apart, with cameos in A Crack in Time and All 4 One. It is a lombax artifact that can be worn as a helmet, allowing the user to open portals to other dimensions on voice command. The device was created in the Great War for use against the cragmites and was hidden away by the lombaxes thereafter, and sought after by many in the Polaris Galaxy, who referred to it as the Lombax Secret. Its immense reality-warping power has made it a highly sought-after device, with some wishing to wield its power for themselves, while others have advised that the device be destroyed to prevent it falling into the wrong hands.

The Dimensionator was used by the lombaxes to end the Great War after they trapped the cragmites in another dimension. Upon returning to the galaxy, Emperor Tachyon sought after the device to bring them back, competing against the space pirates, as well as Ratchet and Clank. Ratchet, upon learning about the device, wished to use it to find his people, though Clank advised he destroy it instead, causing tension between the two. Tachyon successfully brought the cragmites back, before Ratchet and Clank defeated him, locking him in another dimension, in the process breaking the device and rendering it unusable. Later, Vendra Prog sought her own Dimensionator to bring the nethers into the universe, requiring Ratchet and Clank to banish them and once again destroy the device. After this, Dr. Nefarious obtained the device and used it for his own ends.

Before Tools of Destruction

The Dimensionator was developed by the Center for Advanced Lombax Research in order to end the Great War. The device used the Surinox Comet Shard as its main source of power.[1] It was was successful in ending the war, as the lombaxes locked the cragmites away in another dimension.

When Emperor Tachyon built the Imperial Army, the lombaxes used the Dimensionator again, this time to flee to another dimension. Kaden stayed behind and watched over the device on Rykan V, before he was tracked down and defeated by Tachyon. The explorer Max Apogee also obtained and relocated the device to Jasindu, in order to protect it from the space pirates.

At some point, the Plumber obtained a 3 3/4 Centicubit Hexagonal Washer, necessary for the primary reflux coil.

After Tachyon had hunted Ratchet down on Kerwan and failed to eliminate him, he returned to the Polaris Galaxy to resume the hunt for the Dimensionator, sending out recruitment ads for doing so. Known as the "Lombax Secret", the device was fabled as a weapon that wiped out the entire cragmite species. Ratchet and Clank, upon meeting Talwyn Apogee, Cronk, and Zephyr, also sought the device to protect it from Tachyon. Clank, operating on his own intuition and on advice from the Zoni, advised that Ratchet destroy the device due to its power. This angered Ratchet, who had become determined to find the lombax family he had always been missing since childhood, blinding him to Clank's advice.

Upon meeting the Plumber on Sargasso, he told Ratchet and Clank that no such weapon to annihilate the cragmites existed, hinting that the device was not a weapon but a dimensional portal, and giving them a 3 3/4 Centicubit Hexagonal Washer that would become crucial later. After failing to find the device on Rykan V, Ratchet and Clank eventually tracked the device to Jasindu, where it was guarded by the kerchu. The space pirates, led by Captain Slag, caught up with him, and took the device from him there, though their intentions with it were unclear.

Ratchet and Clank defeated Slag, but before they were able to decide what to do with it, Captain Qwark took it from them, determined to toss the device into a black hole to reclaim his mantle of heroism. In doing so, he inadvertantly traveled to the cragmite homeworld of Reepor, where Tachyon took it from him and brought the cragmites into the dimension. Ratchet then admitted that Clank's advice had been correct, blaming himself for not destroying the device when he had the chance.

Ratchet, Clank, Talwyn, Cronk, and Zephyr eventually chased Tachyon back to Fastoon, where Tachyon was launching an invasion to conquer the former lombax homeworld. After confronting Tachyon, he created a portal to the lombax dimension, offering Ratchet a chance to go there and leave this universe behind. Ratchet declined, knowing that Tachyon would ravage the universe with Ratchet gone, and fought Tachyon. In doing so, he damaged the device and caused it to malfunction, dropping him, Clank, and Tachyon in an entirely new dimension. After defeating him there, Tachyon was thrown into another dimensional portal, and Clank repaired the device using the 3 3/4 Centicubit Hexagonal Washer, allowing them to return home. Thereafter, the device remained in the Apogee Space Station, but was not functional. It was moved to Igliak's Intergalactic Museum of History.

The Dimensionator briefly appeared in Clank's subconscious after being pulled out by the Plumber in A Crack in Time.

In All 4 One, a Dimensionator could be seen briefly on the ground in the cinematic after the Wigwump fight. 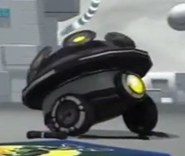 The Dimensionator in A Crack in Time 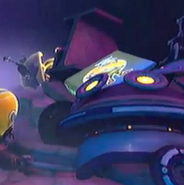 Dimensionator in All 4 One
Add a photo to this gallery

Vendra Prog created a low-rent Dimensionator to summon the the nether leader, Mr. Eye, to her dimension. Upon doing so, Mr. Eye betrayed her and trapped her in the Netherverse, before going on to ravage the galaxy. Neftin Prog teamed up with Ratchet and Clank, fixing the original one to help his sister escape the Netherverse and trap Mr. Eye back in it. Ratchet once again required the use of a 3 3/4 Centicubit Hexagonal Washer to fix the device.

With the device damaged once again, Clank questioned if Ratchet would ever repair it to bring back the lombaxes. Ratchet declined, believing he had everything he needed in his universe, nodding towards Talwyn. As the two left the museum, Clank secretly took the Dimensionator away.

In Rift Apart, Clank repairs the Dimensionator and offers it to Ratchet so he can find the Lombaxes. However, Dr. Nefarious steals the newly fixed Dimensionator and uses it to go to an dimension where he always wins. After Ratchet shot the core of the weapon, it malfunctioned, subsequently causing a catastrophic dimensional collapse that caused multiple locations and realities to mix.

With the Dimensionator under his control, Emperor Nefarious began making more rifts to send his forces across the galaxy to subjugate any further resistance to his rule which only makes the dimensional cataclysm worse. Emperor Nefarious used the Dimensionator to send his forces to conquer, then destroy, Rivet's home of Sargasso but after she successfully repulsed his invasion, the emperor sends Rivet to a pocket dimension to exile her. Though thinking he managed to rid himself of Rivet, the resistance fighter managed to find her way back. Emperor Nefarious then used the Dimensionator once more to send Captain Quantum and many of the Space Pirates to Zordoom Prison. Though having defeated all of his remaining foes, Emperor Nefarious remains unsatisfied and decides to conquer other dimensions but he requires a map of the alternate dimensions to locate them. Such a map existed in the form of the dimensional map made by the Lombaxes and in the safe keeping of the monks on Savali. As such, Emperor Nefarious invades the planet but his constant use of the Dimensionator causes a disruption that raises the dead or Bone Goons and causes problems for his forces. The emperor was close to claiming the map but Prophet Gary, leader of the Monks, managed to hide the map in the catacombs within an dimensional anomaly to keep it from Emperor Nefarious. Frustrated, the emperor creates more rifts "willy-nilly" to find the map but fortunately for him, Ratchet and Clank for find it for him, allowing the Emperor and Dr. Nefarious to claim the map, sending Ratchet, Clank and Kit to Zordoom Prison.

Using the map, Emperor Nefarious was able to locate his counterpart's home dimension and, in a grand announcement, planned to conquer it, starting with Megalopolis City, much to Dr. Nefarious' outrage. However, Ratchet, Clank and Rivet gathered all of their allies, including the Goons-4-Less and Space Pirates, traveled through the rift to battle Emperor Nefarious' forces and eventually his massive Imperial Battle Suit. With their combined strength, the heroes and rebels managed to destroy the emperor's battle suit, forcing him to battle with Rivet one-on-one. Using the Dimensionator, Emperor Nefarious called in all of his forces and followers in a desperate attempt to defeat Rivet but with the aid of Kit, all of them were destroyed leaving the emperor alone. Driven to the brink and refusing to accept his failure, Emperor Nefarious attempted to use the Dimensionator to destroy all dimensions if he can't rule over them but was ultimately beaten by Rivet allowing the Dimensionator to fall back into the hands of Ratchet. With the Dimensionator in hand, Ratchet would open a rift to call upon an angry Kraken who dragged the defeated Emperor Nefarious to his doom.

Back in the hands of its creator, Clank, using his newly acquired knowledge on how to fix the cataclysm, used the Dimensionator to repair the damage done by Emperor Nefarious. With the battle won and over, Ratchet and Clank offer to return Rivet and Kit home but suggests they make a "pit stop" along the way.

The Dimensionator is powered by a Surinox Comet Shard.[1] On the primary reflux coil, it requires a 3 3/4 Centicubit Hexagonal Washer to use it. A cord on the bottom right of the helmet is used pulled to use the device, and it takes voice command for instructions on finding the dimension. While in use, a large metal sphere with two antennae, some springs, and seemingly erroneous pieces including a lombax doll and a punching glove resembling the Walloper appear as the sphere opens portals to a location.

The Dimensionator is capable of finding the desired dimension instantaneously based on relatively minimal voice input. For instance, the command "Find the lombaxes" immediately opened a portal to their dimension, while the command "Find home" was able to recognize Ratchet's home universe and return him there. Due to the ease of use of the device, it appears it can be used by anyone, though the Center for Advanced Lombax Research recommended individuals who are pregnant, have heart disease, or are allergic to intergalactic travel consult a doctor first.

The device was capable of single-handedly ending the Great War by sending the cragmites to another dimension. It is also very fragile and unstable, as simple malfunctions can have dire consequences. It, along with the Great Clock, were one of two methods that would have made it possible to bring the lombaxes back, with Ratchet wrestling with the consequences of both devices' use. Eventually accepting Clank's wisdom, Ratchet has since advocated against its use in any situation.

After being repaired by Clank, the Dimensionator sported a new radical look. Instead of it being used as a helmet, the Dimensionator is now used similar to a rifle, using a crank to power it up and having a console to input a dimensions location. Further, Clank had the repaired Dimensionator powered by Phase Quartz instead of a Surinox Comet Shard.

The team challenged themselves to make the design for the Dimensionator as crazy as possible, relishing in the potential for a zany reveal.[2]

The Dimensionator can be unlocked as a head item in the competitive mode of Resistance 2.

Lombaxes
Retrieved from "https://ratchetandclank.fandom.com/wiki/Dimensionator?oldid=351596"
Community content is available under CC-BY-SA unless otherwise noted.