Set a new record for Qwark (4:45)
Deja Q All Over Again was the fourth and supposedly last Qwark vid-comic in Up Your Arsenal. The story takes place in Metropolis, and depicts Captain Qwark interrupt his exercise for Helga von Streissenburgen to defend the city from an attack by Dr. Nefarious' army of insectoids. The vid-comic had come in the mail for Qwark, and was obtained by Ratchet shortly after the Leviathan crashed with Qwark unable to escape. After playing this vid-comic, Ratchet realized that Nefarious would attack Metropolis again.

The events of Deja Q All Over Again are partially reminiscent of the original Ratchet & Clank, in which Ratchet and Clank completed the Captain Qwark fitness course only to be berated by Helga at the end. The fitness course is very similar in appearance.

Shortly after defeating Dr. Nefarious in Shadow of the Robot, Qwark retired to his condo in Metropolis to rest and watch Lance and Janice, when the doorbell rung. He opened the door, believing it to be a pizza he had ordered, it was in fact Helga, who instructed him to take part in the fitness course due to his gained weight. Qwark begrudgingly agreed. Meanwhile, Dr. Nefarious, from the city rooftops accompanied by Lawrence, released a horde of robotic insects on the city to enact vengeance.[1]

During the fitness course, Qwark took a flying bus to another part of the city, when Nefarious' insectoids attacked, causing it to explode. Qwark fought a group of insectoids to repel the attack, before then encountering Nefarious, now in robotic form. Qwark defeated Nefarious, who vowed to return to Metropolis to get revenge, before Qwark disposed of his head in a trash can. Before the story could continue, the narrator commented that the page was missing a few pages, before Qwark interrupted and declared the story had concluded.[2]

Deja Q All Over Again takes place in Metropolis, and begins in the fitness course previously seen in Ratchet & Clank. The fitness course similarly contains expanding and retracting platforms to jump across, and also features floating platforms that fall under Qwark's weight, as well as ziplines used to get to different islands of the course.

After the fitness course, Qwark uses a flying bus to travel through one of the tunnels of Metropolis. The rest of the vid-comic takes place over Metropolis' rooftops, where Qwark is attacked by Nefarious' robotic insects, known as insectods.[3] These insectoids always appear in mobs, often generated from small yellow generators that pump out insectoids until destroyed. Some of them appear in insectoid swarms,[3] which gather in a group and can fire laser beams, and are more resilient. In this area, Qwark picks up a blaster that lobs bombs, which can bounce slightly, and explode on contact with an enemy. 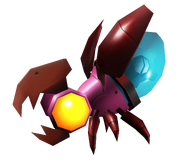 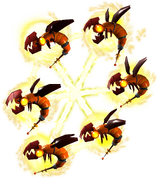 The beginning of the mission is a platforming challenge over Qwark's fitness course. To start with, jump right across the platforms when they expand outwards until you reach a zipline; jump on it to slide across to the next area. Next, you must again time your jumps across and hop onto a floating platform that will take you to a zipline, once again down to the next area. Here, jump onto the platform when it expands and then hop across the floating platforms, which fall if you stand on them for too long, and wall jump upwards to a ledge. Jump down across the expanding platforms, but not too quickly so as not to fall if the next one has not yet expanded, then hop across the floating platforms and take the zipline down. At the end of the zipline, you should have 21 tokens.

When you land from this zipline, immediately jump across the falling platforms to reach a stationary platform, with a set of expanding platforms to the right. To complete them, jump across them in a zig-zag pattern while going up; left to right, right to left to reach the upper platform, and finally hop across the top two platforms to a ledge, and head right. Before you climb the ladder and land on the waiting bus, instead head right underneath it and drop down to reach a red token, then head back up and land on the bus. You should now have 36 tokens.

While using the bus, it will come under attack from insectoids. Punch the insectoids that appear on the top of it, and pick up the red token halfway through the tunnel. After exiting the tunnel, it will crash; jump across to the right to reach the ledge, and then climb the ladder upwards to obtain a weapon. Fire it to destroy the group of insectoids on the right, and hop down to destroy the generator from which they spawn, then head right and repeat with the insectoids generated from a generator on a small platform. As you head further right, you will be locked in a room with an insectoid swarm, that will fly around, charge up a beam, and fire it at the ground. Dodge it and jump over the shockwave from the beam, and wait until the swarm lowers slightly to fire bombs at it by jumping, or fire at them from below. You should have 49 tokens by this point.

After defeating the swarm, head right, destroying the insectoids and their generators, until you reach a ladder. Once you climb the top of this ladder, before continuing right, jump left and latch onto a ledge to obtain another red token, then head right and destroy the insectoids. Destroy the next set of insectoids coming from a generator below a small platform, and obtain the red token beneath it, then head right to find another swarm. It is possible to use the wall jump on the right to get in position to continually fire bombs at it. You should now have 83 tokens.

Drop down below the hatch and immediately fire a bomb as insectoids will appear, then destroy their generator and head right to defeat another swarm, which can be done by simply standing on the upper platform to reach it, then take the ladder upwards to destroy another generator, and take the next ladder upwards again. At the top, head left to grab the red token, then head right and jump up the first set of platforms. When you destroy the first insectoid generator, instead of heading right, jump left to land on a small platform, and then jump left across a few platforms to reach a ledge where the health upgrade can be found. After this, head back to the right, destroying all the insectoids and swarms as you jump across the platforms, during which time you should have obtained all 100 tokens for the titanium bolt. Eventually, you will reach the boss battle against Dr. Nefarious.

Nefarious will start the battle by walking towards Qwark and swiping with his claws. After taking damage from any weapon, he will immediately swipe with his claws as a counterattack, meaning that punching him is ill-advised. In his next stage, he will gather up a cloud of energy, before throwing it at Qwark; this can be jumped over by using wall jumps, and can even hit Nefarious. His next attack is to generate a few beams of energy across the ground, which can be avoided by stepping outside of their radius. Finally, he will create beams of energy that can flood the outer area before reaching him, which are best dodged by running across and simply jumping over Nefarious.

For this battle, the best option is to constantly fire bombs at him, and when he launches his cloud of energy, wall jump to avoid it and try to land behind Nefarious so it hits him. Use wall jumps often, particularly when picking up ammo, and try to avoid him whenever possible. Try to stay out of range and play defensively, constantly firing bombs and avoiding attacks, until he is defeated. Going melee does work if you have health to spare, as it is a good way to finish him off if you lack in ammo.

Side missions in Up Your Arsenal
Community content is available under CC-BY-SA unless otherwise noted.
Advertisement