Darters[1] are enemies in Ratchet & Clank and the 2016 re-imagined game. They are aerodynamic bat-like birds that dive at enemies to attack with their beak. While they are often found amongst toxic crabs, they do not wake them up.

In the original release, darters were encountered by Ratchet and Clank in the Kogor Refinery, Orxon, during "Explore as Ratchet" and "Catch the Infobot". Many darters were found along these paths and would screech when finding Ratchet, then dive down to bite him.

In the re-imagined release, darters were instead found in two different locations. First, darters were found in the Blarg Research Outpost, Gaspar, first while Ratchet attacked the Blarg Depot in "Fight the Blarg", and then throughout the Telepathopus Fields during "Trade 20 brains for an infobot" and onwards. Darters were also encountered in the Jowai Resort, Pokitaru, at the top of the Torgoff Waterfall during "Find a way to the top of the waterfall".

Darters are orange, medium-sized birds with bat-like wings. They have blue eyes, sharp talons, and long tails. When spotting an enemy, they will let out a shriek, before flying in close to their opponent, and once in range, they will bite with their beak.

In the original release, darters are difficult to hit due to their flight and agility, as the OmniWrench or Walloper will leave Ratchet vulnerable after an attack. The moment they get close for an attack is when you should dodge straight away. The Pyrocitor can be useful to spray in a direction to hit them, or the Blaster can shoot them from a decent range. When fought on a Magne-Strip, they are at their most dangerous, as it is difficult to turn, and the OmniWrench is the only weapon Ratchet can use against them; however, it is less likely to miss here. Despite being small enemies, they can not be sucked up with the Suck Cannon.

In the re-imagined release, darters are less of a threat, but should not be underestimated, as they can still provide damage while being agile and relatively difficult to hit. As they are flying enemies that attack in groups, the best weapon against them is the Pixelizer, which can also knock them back as they swoop in to attack. The Combuster or Warmonger are also feasible alternatives.

In the re-imagined release, the darter's character model is reused to represent creatures flying in the skies of Veldin, Aridia, Rilgar, and other planets. These creatures cannot be hit, as weapons will not come in range, and they replace the pterodactyls that appear in the original release. 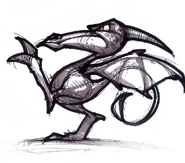 Concept art from the re-imagining.
Add a photo to this gallery