Mud Oceans and some Rocky terrain

This doesn't look too hospitable. Maybe they put in false coordinates to throw us off the trail.

Challax was a desert planet located in the Solana Galaxy. During the time of the creation of the Ratchet Clone Factory on Quodrona, Challax was home to the Technomite City. The planet was guarded by a Technomite Orbital Facility, and a fleet of Technomite ships. Ratchet and Clank travelled to Challax to find Luna.

Challax was a desert planet and also rocky. It was very hot due to the planet having two suns, meaning merely any plants or grass could be found on the planet. There were also oceans of mud and rocky mountains scattered about.

Challax is a vast desert world this an occasional rocky mountain. The temperature make this planet almost completely deserted of life. Life seems to thrive inside the rocky mountains. Small flowers and clover like plants can be found inside these mountains along with some beetles and dragonflies, which to the local Technomites are massive creatures. Outside the safety of rocky mountains, only Skreeducks appear to live outside in the vast deserts of Challax.

The city couldn't be accessed by those who did not have a Shrink Ray to shrink themselves. The Technomite City seemed to have some trouble with insects, which were gigantic, compared to the Technomites.

While following the track of Luna who had double-crossed them, Ratchet and Clank used the Shrink Ray on themselves to explore the city in search for Luna. When they had fought their way through the city against many Technomite Shock Troopers and a Technomite Dropship, Ratchet and Clank found Luna, only to realize that Luna was merely a robotic puppet controlled by Technomites.

"Challax" is a name that is also used in another one of Insomniac Games's series, Spyro the Dragon. Challax was the name of a dragonfly, seen only in Spyro: Enter the Dragonfly. 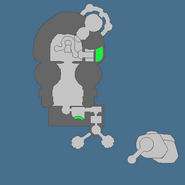 Map layout of Technomite City
Add a photo to this gallery
Retrieved from "https://ratchetandclank.fandom.com/wiki/Challax?oldid=330295"
Community content is available under CC-BY-SA unless otherwise noted.