Cannonball tanks,[1] also known as bomber tanks,[2] are enemies in Ratchet & Clank and the 2016 re-imagined game. They are large, strong tanks with double barrel cannons, used by the blarg. They are encountered by Ratchet and Clank in Fort Krontos, Batalia (and in the Deplanetizer in the re-imagined release), and also seen parked in the Blarg Depot on Gaspar.

Cannonball tanks appear twice on Batalia, first during "Meet the Commando at city" in which they were encountered along the way to the fort, with the HelpDesk Girl recommending using the Devastator against them.[3] They were then encountered during "Explore the walled city" in which two were fought in the fort itself. Later, Ratchet and Clank found several inactive cannonball tanks in the Blarg Depot on Gaspar during "Find the Pilot's Helmet".

In Qwark's version of events, cannonball tanks had a similar appearance. They were first seen by Ratchet in the Blarg Depot on Gaspar during "Fight the Blarg", though they were inactive. The first active cannonball tanks were fought on Batalia, in which Ratchet and Cora Veralux fought two on the way to the fort in "Travel to the Fort", and then fought two again in the fort itself in "Get to the Turret".

Ratchet later encountered tanks inside the Deplanetizer in a large armory onboard the station during "Head to the Bridge". 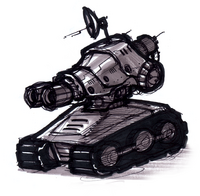 Concept art for the re-imagined release.

Cannonball tanks are green tanks with long tracks, and a tall, double-barrel cannon sitting on top of their chassis. They move on their tracks relatively slowly and fire a repeated barrage of cannonballs from their cannon. In the original release, they move in fixed patterns, though in the re-imagined release, they have more independence.

In the original release, cannonball tanks move in fixed patterns and fire a barrage of bombs at Ratchet when in medium range. They are extremely tough and take many hits to destroy them, but they serve less as a threat than an obstacle blocking the path forward due to their size. They should be destroyed with either the Devastator or the Glove of Doom, as both weapons hit hard enough to deal sufficient damage. After sustaining damage, the top half with the cannon is destroyed, rendering them harmless. The bottom half can be destroyed for bolts.

In the re-imagined release, cannonball tanks are a great threat, due to less limited movement, and longer range from their barrage of missiles. They also retain their toughness, making them a significant threat, and are normally fought alongside other enemies such as warbots and blarg bombthrowers. It is best to deal with smaller threats first, as cannonball tank fire is often easier to dodge in comparison. The tanks are best destroyed with hard-hitting weapons such as the Warmonger, Predator Launcher, Plasma Striker, and later, the Glove of Doom.