Ratchet & Clank Wiki
Register
Don't have an account?
Sign In
Advertisement
in: Pages with non-numeric formatnum arguments, Weapons in Going Commando, Weapons in Up Your Arsenal,
and 3 more
English

8 / 12
13 bolts
4
Image needed
This article or its infobox is missing one or more images. You can help the Ratchet & Clank Wiki by uploading one.
For the character, see Qwark's bouncer.

The Bouncer is a weapon manufactured by Megacorp in Going Commando, Up Your Arsenal, Ratchet & Clank (2016 game) with a preorder bonus, and Rift Apart. It launches a large bomb, which in turn launches smaller bomblets upon impact.

In Secret Agent Clank, Bouncer bombs can be incorporated into the Mine Launcher through it's ordnance mod.

The Bouncer was developed by Megacorp, and first sold to Ratchet at the mining area, Tabora. In his next adventure, Slim Cognito sold the Bouncer from Aquatos, offering it to Ratchet during "Find Captain Qwark". Slim promised to offer a 10% smart shopper discount if Ratchet arrived quickly,[1] commenting on their connections when they obtained the weapon for free.[2]

The Bouncer is a bomb launcher with a blue primary and orange secondary color usage. It has a large nozzle from which the bombs are launched. The Heavy Bouncer is slightly longer, and is almost entirely black, save for a few yellow accents on the top of the back end.

The bombs launched bounce slightly before launching many bomblets which bounce multiple times before finding their targets. They differ slightly in appearance between Going Commando and Up Your Arsenal. 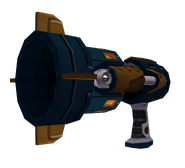 The Bouncer from Going Commando. 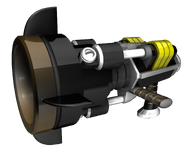 The Heavy Bouncer from Going Commando.

The Bouncer from Ratchet & Clank.

Upon firing, the Bouncer's bomb will attempt to bounce towards the nearest target, either exploding on contact or prematurely if nothing is reached. Upon detonation, it will release a large amount of bomblets, which proceed to either bounce towards a target of their own choice, or detonate prematurely if nothing is found. Because of the nature of the bomblets, it is just as useful against singular, strong enemies, as it is against a large number of weaker to medium-strength enemies. The sheer power of the bomblets will overwhelm any single foe, while the sheer number will overwhelm any group within reach. It is not without flaw, however, for it has a very low rate of fire and mediocre range as well, being unable to hit flying enemies, or those on higher ledges.

The weapon can be modified with the Acid Mod or the Lock On Mod. The former can enhance the power of the weapon by applying damage over time, with its spread of bomblets allowing the acid effect to affect multiple enemies, whereas the latter greatly increases its range and allows it to easily hit flying targets and enemies from further away.

The Bouncer becomes from Slim's vendor on Aquatos upon reaching the Thran Asteroid Belt. It can be purchased from him for 150,000 bolts, though if the player has a Going Commando save file, it is acquired for free. It upgrades to the Heavy Bouncer upon reachng level 5, and in challenge mode, it could be upgraded to the Mega Heavy Bouncer for 740,000 bolts from any Gadgetron vendor, and upgraded further with use.

The Bouncer in Up Your Arsenal functions near-identically to the weapon in Going Commando. The main difference is that, instead of purchasing weapon modifications separately, the upgrades are spread out over its five levels. At V2, it gains acid damage, and at V3, it gains the Lock On Mod. Its upgrade at V4 is unremarkable and simply improves it damage. As the Bouncer is useful in the vast majority of circumstances, it is useful to level up and use the weapon.

The Bouncer is available early on Novalis for one hundred bolts from Gadgetron vendors if the player had used a pre-order code with the game. In challenge mode, it can be upgraded to the Omega Heavy Bouncer for 130,000 bolts. Unlike other weapons, no holocard set exists for it, though the Bouncer's holocard is part of the Fusion Grenade's holocard set.

The Bouncer can be upgraded with raritanium upgrades. Most of these upgrades improve the weapon's ability to spread its damage over multiple targets, with two of its mystery upgrades improving the area of effect over the main bomb and the bomblets. Otherwise, the Bouncer functions near-identically to the weapon in Going Commando and Up Your Arsenal, as an extremely potent and versatile weapon useful weapon against all threats. However, given that it is acquired so early in the game, it changes the dynamic of the game drastically.

The Bouncer in Rift Apart can be obtained upon reaching challenge mode. After reaching level 5, it becomes the Heavy Bouncer, and the Omega Heavy Bouncer can be purchased for 55,000 bolts. As with Ratchet & Clank, raritanium upgrades are availale for the weapon, most of which broadly improve the bomblets and main bomb of the weapon. Though valuable, the more valuable upgrades are the bonus upgrades: one which improves it max ammo by 4, and two others that increase the number of bomblets drop.

As with other iterations of the weapon, the Bouncer's nature makes it strong both against clusters of smaller enemies, and larger enemies. However, its drawback in Rift Apart is the number of flying enemies and longer-range enemies which the Bouncer is less effective against. Additionally, because it is acquired during challenge mode, many other options with a similar role are available when possessed, such as the Blackhole Storm or RYNO 8. Nonetheless, the Bouncer is still a strong weapon to use once invested in, and can be used to great effect to clear rooms of enemies.

The Bouncer was proposed simply as "what about a gun that drops a ton of balls" during the preproduction stage. It was given a prototype, but was not going to be included in Going Commando early on. The weapon was later resurrected when the Rift Inducer was cut from Going Commando.[3] It was originally referred to as the "F.I.D.O.".[4]

In PlayStation Move Heroes, the Bouncer appears as a weapon for Ratchet. Its bombs explode on contact with an enemy and does not release bomblets.

Many weapons from other manufacturers that followed after the Bouncer also launched miniature bomblets after the first initial explosion from their bombs. The Mini-Bomb Mod in Deadlocked allowed this functionality to be used by any weapon. The Fusion Bomb in Tools of Destruction also contained miniature bomblets, known as "Intelli-Seeking Pyrocidic Nitroballs". Furthermore, A Crack in Time featured a Barrel Upgrade for the Constructo Bomb which could launch miniature bomblets.

Equipment in Going Commando
Equipment in Up Your Arsenal
Equipment in Ratchet & Clank (2016 game)
Megacorp
Español
Community content is available under CC-BY-SA unless otherwise noted.
Advertisement