Booty is in the Eye of the Beholder

Booty is in the Eye of the Beholder, also known as Pirate Booty!, is the first Qwark vid-comic in Up Your Arsenal. The comic tells the story of Captain Qwark fighting robotic pirate ghosts led by Captain Blackstar and his robotic space eel. Al gave the vid-comic to Ratchet and Clank after repairing the Laser Defense Shield on Marcadia, after trying to use Capital City's defense system to play it. The vid-comic helped restore Qwark's memory.

In the Insomniac Museum, a beta version of Booty is in the Eye of the Beholder can be played, known as the Special Edition. It features Captain Blackstar as the boss rather the robotic space eel, as well as an entirely different level layout.[1]

The Solana Galaxy, in the early days of the fifth Solarian equinox, had been terrorized by the dread pirate Captain Blackstar and his crew of robotic pirate ghosts. Qwark was already a living legend by this point, and boarded Blackstar's ship to confront him.[2] Qwark obtained the blaster and fought through the pirates before fighting Blackstar's space eel.

After defeating them, Qwark reluctantly accepted a fee of an extravagant sum of bolts, donated to the Qwark for Tots Scholarship Fund, a charity providing makeovers and buxom bimbos for people named Qwark.[3] Qwark then received a call from the galactic president that Blackwater City was under attack, leading into Issue 2: Arriba Amoeba!.

The narrator of the vid-comic remarked that the premise of the comic was ridiculous. He hoped after reading it that "robotic pirate ghosts" was a typo,[2] and prior to narrating the closing scene, he remarked "do they think we're idiots?" at the ghost pirate robot premise.[3]

Booty is in the Eye of the Beholder takes place on Captain Blackstar's pirate ship in space. The ship is dark and has a derelict and dilapidated appearance, with moving cogs and machinery seen in the background, as well as large cobwebs across the area. Skull insignia, with three eyes, can be seen throughout the ship. In addition, the ship contains several ghost skulls that appear from the ground, and much of the ground is impassable and filled with spikes, crossed only using platforms.

Qwark encounters three types of enemies. Space rats[4] are small grey rats with one red eye and an antenna; they are melee enemies that can be defeated in one hit and are easy to avoid. The main enemy, robotic pirate ghosts,[4] are blue humanoid enemies that come in two forms: one that uses swords and attacks in close range, and one that throws bombs. 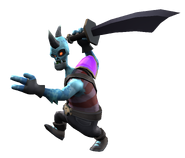 Robotic space eel
Add a photo to this gallery

Qwark's control scheme is basic but similar to Ratchet's: Qwark has one jump with

, and a punch attack with

. When the level begins, head right jumping over platforms, avoiding the skulls that appear from the ground, and then before heading to the elevator on the right, jump up to a platform above and hop across the platforms on the left to pick up blue Qwark tokens until you obtain a red one.

Hop back to the right and land on an elevator, following it upwards. Make sure to move left and right to avoid the bombs that drop and punch the space rats that appear, as well as obtain the tokens that are found in the compartments on the left and the right (if you end up in one of the compartments and the elevator has ascended past you, it will eventually descend until you board it again). When the elevator reaches the top, punch the pirate that was dropping the bombs, then proceed right and punch the next pirate. By this point, you should have 46 tokens.

Jump on the blue platform and immediately jump to the next platform as that one will disappear, and continue to jump up the platforms. Make sure to reach the red token in the top-left corner of this section, then proceed right. Punch through the pirates and dodge the skulls as you hop across platforms, until you reach a small, narrow chamber, where space rats will surround you on either side. Punch through them and proceed right to a wider area, where one pirate and several rats will attack; punch through them right, and dodge the pirate throwing a bomb, then jump up and punch them. You should have 72 tokens at this point.

When you proceed right, you will enter a larger room with a weapon on top of a platform. Obtain the weapon, a blaster, and the robotic space eel will appear across the screen, and you will then be surrounded by pirates. Fire the blaster with

to aim it at the cost of being immobile, and kill all the space pirates and rats, and then you can proceed right, where the blaster will appear again to refill ammo.

Continue to hop across the gaps, avoiding the ghost skulls that appear from the floor, until eventually you will reach a chamber with a group of platforms heading upwards. Shoot the ghost pirate that is throwing a bomb on the left, and grab the red token above them, then use the wall jump to jump back to safety, and proceed upwards. By the time you reach the next blaster pickup, you should have 92 tokens.

Continue right, jumping across the gaps, and avoid the spikes and ghost skulls. When you see pirates, simply shoot them from a distance. Soon, you should obtain all 100 tokens, and be awarded the titanium bolt. Shortly afterwards, you will face a group of stairs with pirates across them; shoot each of them and jump up to proceed, and hop across the disappearing platforms, where you will find a health upgrade, which upgrades and refills your health. Past this, you will encounter the boss.

The robotic space eel will appear from one side of the map and fly towards the other end, often in a rather roundabout way, dealing damage if it hits. Sometimes it will swerve for your position, or perform a loop. The space eel's movement speed depends on the stage of the boss; at the beginning of the fight, it will move fairly slowly, making it easy to aim at and to avoid. At later stages, it will move much faster and be more difficult to avoid.

The best bet is to wait and figure out its intended direction, then find a safe spot, aim, and lay into it by firing as much as possible. Ammo is not an issue here, as it will drop every time the eel leaves. Halfway through some debris from above will fall down along with a new blaster, but dodging it only requires standing underneath the platforms.

Another option is to let it attack, and punch it repeatedly; though it will deal damage to you, you can deal much more damage to it in a short space of time, making it a risky strategy with a high reward. Once defeated, the vid-comic ends.

The name of the vid-comic is a reference to the phrase "beauty is in the eye of the beholder".

The original version of Booty is in the Eye of the Beholder was considerably more complex than the version playable in the final game. It originally featured branching paths, much wider areas, a treasure room at the bottom, and a boss battle against Blackstar. This version, known as the "special edition", is playable in the Insomniac Museum.[1] Blackstar himself proved too complex to be used as the boss battle of the vid-comic.[5] However, he is still found in the museum in a showcase, in the special edition of the vid-comic, and in a minigame known as Pirate vs. Ninja.[6]

Side missions in Up Your Arsenal
Retrieved from "https://ratchetandclank.fandom.com/wiki/Booty_is_in_the_Eye_of_the_Beholder?oldid=337177"
Community content is available under CC-BY-SA unless otherwise noted.