Bolt thieves[1] are enemies in Ratchet & Clank. They are small, floating, fast robots with two arms, encountered on Batalia, Oltanis, and Kalebo III. Three are hidden throughout Batalia in a small area and will flee if Ratchet approaches, and can be shot for a large sum of bolts. 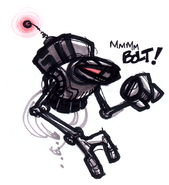 Enemies and bosses in Ratchet & Clank
Blarg
Community content is available under CC-BY-SA unless otherwise noted.