Ratchet & Clank Wiki
Register
Don't have an account?
Sign In
Advertisement
in: Weapons in Going Commando, Megacorp, Weapons in Up Your Arsenal multiplayer
English

The Blitz Gun is a Megacorp manufactured weapon in Going Commando and Up Your Arsenal multiplayer. It is a medium-to-long range shotgun with a low rate of fire and moderate damage that fires a shower of scatter shots followed by arcs of lightning.

The Blitz Gun was made available for purchase at a Megacorp vendor upon reaching Oozla for 15,000 bolts. It could be upgraded to the Blitz Cannon with use. In challenge mode, it could be upgraded to the Mega Blitz Cannon from any Megacorp vendor for 375,000 bolts. In Up Your Arsenal it keeps the Blitz Gun name when it is upgraded.

The Blitz Gun is a small blue and silver shotgun with a large irregular hexgonal barrel and a lower muzzle beneath it. It also features an orange targeting computer above the muzzle and a left-hand grip at the back. It fires scatter shots followed by arcs of lightning.

The Blitz Cannon is wider with two barrels side-by-side. When pulling it out, Ratchet would have a grin on his face.

The Blitz Gun is a powerful shotgun, with a solid firing rate and a large spread of pellets that lose damage over time and end at a fixed range. Due to the range and spread of the weapon, it becomes more and more effective the closer it is to the enemy. In turn, this increases the danger for Ratchet, but also his damage output. Nonetheless it has some use at range while attacking multiple weaker enemies, as the spread ensures it can hit nearly all in front of you when firing it.

The Blitz Cannon further improves on the Gun's single-minded approach, delivering more spread, more damage and more punch to each attack. The available weapon modifications, the Acid Mod and Lock On Mod, provide little effective use to the weapon, though the Acid Mod can provide more damage to decrease its limited use against enemies encountered in the later half of the game.

During development, Sony's test department filed a bug that read: "You can buy the Blitz Cannon. MUST NOT BE ABLE TO BUY THE BLITZ CANNON".[1] 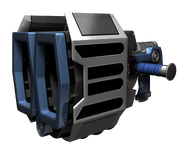 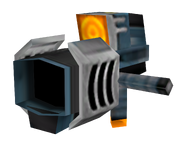 Blitz Gun from Up Your Arsenal's multiplayer