The blargian snagglebeast is a boss in Ratchet & Clank and the 2016 re-imagined game. It is a large, blargian, monstrous creature controlled from a cranium cap, which can survive in a pool of lava. Captain Qwark owned one in his headquarters on Umbris, which he planned to use to take down Ratchet and Clank. In the re-imagined release, a snagglebeast is instead used by blarg scientists on the Blarg Tactical Research Station in Nebula G34 as a research project.

Later, after Ratchet and Clank have fought through Qwark's gauntlet, Qwark lured them into a trap, which caused them to be trapped in the snagglebeast's lair, leaving them to die. In "Destroy the Snagglebeast", Ratchet and Clank defeated it and left the planet using Qwark's tour shuttle.

After being recruited to the Galactic Rangers on Kerwan, Qwark gave Ratchet and Clank their first mission, "Find the top secret Blarg research project", asking them to travel to the Blarg Tactical Research Station in Nebula G34 to search for it. Upon entering the lair, Ratchet found that the project was a blargian snagglebeast being controlled by blarg scientists from a cranium cap. Qwark appeared surprised, believing the project would be much less lethal.

After "Defeat the Blargian Snagglebeast", the two eventually defeated it and interrogated one of the scientists, who gave them an infobot for Gaspar.

In A Crack in Time, a reference was made to another snagglebeast, as the space radio advertisement for My Blaster Runs Hot featured a citizen saying, "I thought Qwark was a myth, like the abominable snagglebeast of Zanifar".

The head of a blargian snagglebeast appears mounted on the wall of Zurkie's in Rift Apart. A snagglebeast is also among the things that can fall from the portals created by the RYNO 8. 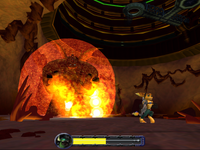 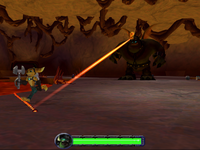 The snagglebeast firing a laser.

The blargian snagglebeast is a tall, dark green, monster with large muscles, three fingered hands, three-toed feet, and horns. It wears chains around its neck, wrists, and waist, with a cranium cap containing antenna on its head. In the original release, the monster is humanoid and stands upright, has bright blue eyes, two large ears, and hair around its neck, as well as a large chin. In the re-imagined release, the snagglebeast instead stands more like a gorilla with two large arms, which it uses to move with. It also has two small legs, small ears, glowing red eyes, black horns on its back, and wears armor around its neck and metal armor on its legs.

The snagglebeast is a large, unintelligent monster, and has slightly different abilities in each release. In the original release, it walks slowly around the lair, and is capable of firing blasts of fire from its hands, firing a laser beam from its head, launching fiery waves from its feet, sucking the ammo from Ratchet's weapons, and creating an impenetrable forcefield around itself. In the re-imagined release, the blargian snagglebeast is much faster, and primarily uses its arms to attack its foe, either lunging forward to hit them, or hitting the ground to create lava below their feet, as well as breathing large waves of fire from its mouth. This snagglebeast also summons alien swarmers and alien snappers when low on health.

The blargian snagglebeast's boss theme from the original Ratchet & Clank is used in Up Your Arsenal for the theme on Zeldrin.

In Into the Nexus, the Legend difficulty is described as having made a blargian snagglebeast shed a tear and then shove it back in its eye.

In the re-imagined release, the snagglebeast and its attacks largely resemble the war grok from A Crack in Time. 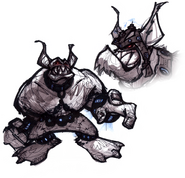 Concept art from the original game.

Concept art from the re-imagined release.