Blarg gunners[1] are enemies in Ratchet & Clank fought on the Gemlik Base in the Oltanis orbit. They are blarg troopers working for Drek Industries, manning turrets which are protected by large, indestructible shells, containing a small horizontal slit where the turret's barrel fires. Ratchet and Clank encountered them during "Explore base". 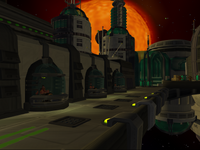 A group of Blarg gunners. 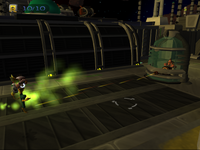 Blarg gunners fire a barrage of bullets from the turret once Ratchet is in range. Depending on if their turret is built into walls or out in the open, they will either take a split second to fire or will fire immediately without ceasing. While the gunner manning the turret will die from a single OmniWrench hit, the turrets themselves are indestructible and cannot be attacked head-on. However, the turrets are only capable of rotating left and right and cannot fire up or down, meaning that Ratchet can jump over the bullets and run to safety. For gunners with turrets out in the open, the ideal strategy is to run around them or use the Glove of Doom to send Agents that will run around the turrets and attack them. For some blarg gunners built into the walls, the best option is to use the Blaster to aim through small holes in the walls to snipe them off, or to find a way to enter the buildings they are in and destroy them there.

In the 2016 re-imagined game, blarg gunners do not appear, as instead, blarg troopers fill their role.